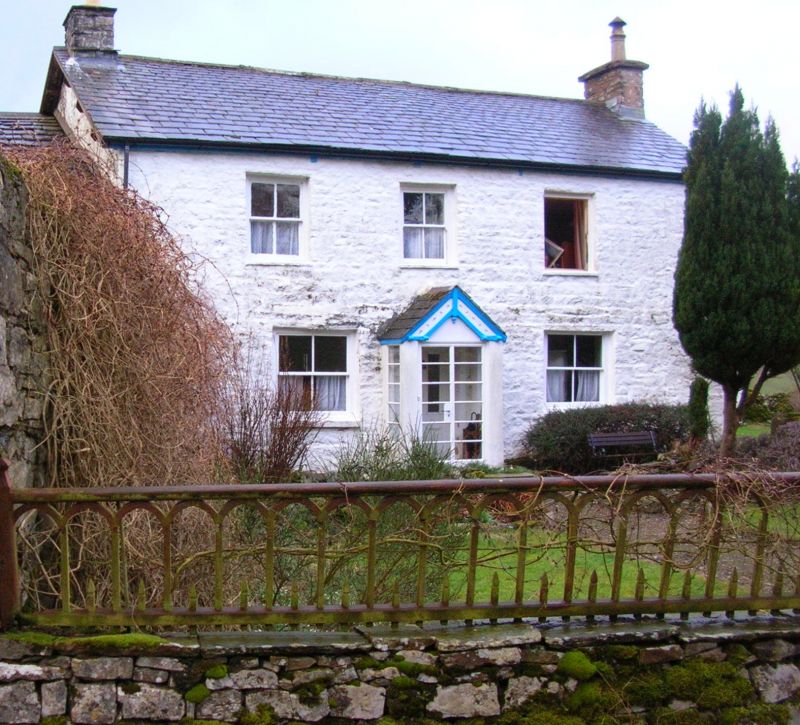 Farmhouse, now house, with attached outbuilding at west end.
Mostly mid C19 but incorporating part of a late C17 or early
C18 house as a rear wing. Roughly coursed sandstone rubble
with quoins, the front painted white, slate roof to main
range, stone slate to outbuilding. Irregular plan formed by a
C19 double-depth double-fronted main range on an east-west
axis facing south, with a continuous full-height rear outshut
which overlaps the east end and incorporates the earlier
fabric; and an outbuilding attached at the west end.
EXTERIOR: 2 storeys and 3 windows, almost symmetrical, with a
C19 glazed porch in the centre flanked by square 4-pane
sashes, and 3 similar sashes above (all these openings
collectively offset slightly left). Gable chimneys. Tall 1-bay
outbuilding continued to left. The right-hand (east) gable
wall has 2 sashes at ground floor and a re-located or ex situ
stepped 3-light mullioned window at 1st floor, with a
hoodmould. The projecting monopitched end of the rear outshut
has a lean-to at ground floor and a large corbelled chimney.
The rear of this outshut has a plain doorway offset left, a
small fire-window and a 9-pane fixed window to the left and a
12-pane sash above, and a tall 12-pane stair-window to the
right.
INTERIOR: 2 chamfered beams in room with corbelled chimney.
Forms group with barn approx. 20m north (qv).