Brackensgill and Attached Barn to East 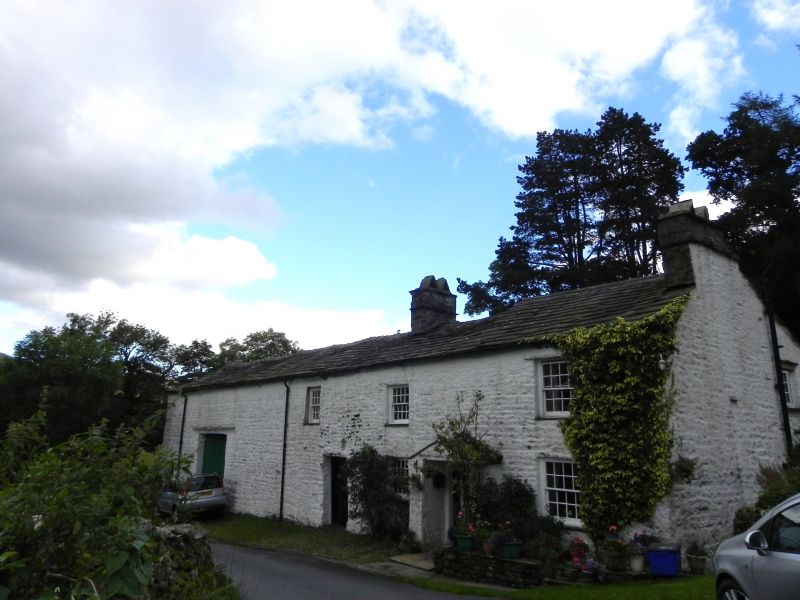 Farmhouse with attached barn. Perhaps C17, remodelled and
enlarged in C18 and C19. White-washed coursed rubble, stone
slate roof. Two-unit plan on east-west axis, facing north,
formerly all single-depth but the 2nd unit raised and extended
to the rear and a single-storey lean-to outshut added in the
angle with this; barn continued to the east.
EXTERIOR: 2 storeys and 2 windows, with a shallow porch offset
left of centre, a 16-pane sash on each floor to the left and
similar but larger sashes on each floor to the right. Roof
ridge higher over 2nd unit; lateral chimney on ridge at
junction with barn to left, similar chimney at right-hand
gable, both with 2 pitched stone-slate caps to the flues.
Five-bay barn to left has square-headed doorway next to
junction, a small sashed window above and to the left of this,
a square-headed wagon doorway to the 2nd bay and a square
window to the left of this. Rear has some small windows,
including narrow stair-window.
INTERIOR: doorway opening directly into housepart, which has
one lateral beam and exposed joists; stone lateral partition
to parlour on left, original doorway to this now boarded.
Thick stone partition wall to rear rooms (originally
external), incorporates (in kitchen to rear of housepart) a
re-located carved bread cupboard (perhaps removed from
partition to parlour) of which only the top tier and its
mantel dated 1632 are now exposed.