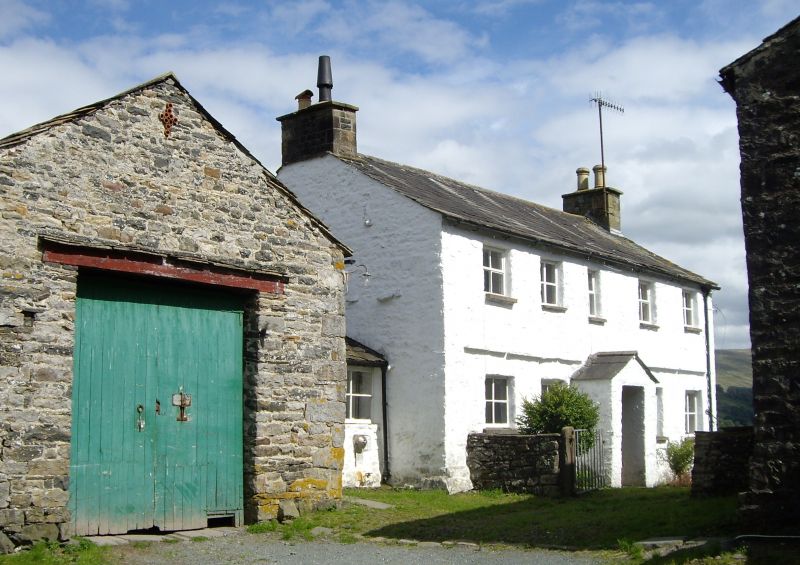 Farmhouse. Probably early C18; altered. White-washed rubble
with quoins, slate roof. L-plan: single-depth 2-unit main
range on east-west axis facing south, with a rear wing to the
west unit; plus a short side wing added to the west gable.
EXTERIOR: 2 storeys and 5 windows, symmetrical; with a stone
slate drip-course over the ground floor. The ground floor has
a small gabled porch in the centre protecting an original
studded oak door with strap hinges, a re-used iron hoop and a
wooden pull-handle, flanked by square windows with 4-pane
glazing; the upper floor has 5 similar windows except that in
the centre which is narrower. Gable chimneys. Low single
storey side wing set back at left end, linking the house to
the barn. Rear: the wide gable of the wing has 3 windows
offset on 3 levels, all with stone slate drip-bands, and that
to the right at ground floor and that above to the left both
oblong, 6 lights with oak frames including a transom and 2
mullions chamfered on the inside. (These windows are an
important and significant survival, in view of the large
number of houses in these dales built in the same period which
have altered glazing in similar openings.) The rear of the
main range has through-stones on 3 levels, and an altered
fire-window near the east end of the ground floor.
INTERIOR: east wall of housepart to right has muntin-and-rail
panelling in at least 3 different forms (some pieces carved
with lozenges, arches, scrolls, etc., perhaps formerly parts
of a court cupboard) and a built-in spice cupboard to the
right of the chimney-breast with "I R / 1742" carved on the
door, "T G 1669" on a panel above and "G W 1864" below;
dog-legged staircase with open string, turned balusters and
simple handrail; muntin-and-plank panelled partitioning at 1st
floor. Forms group with barn to south (qv) and barn linked to
west end (qv).