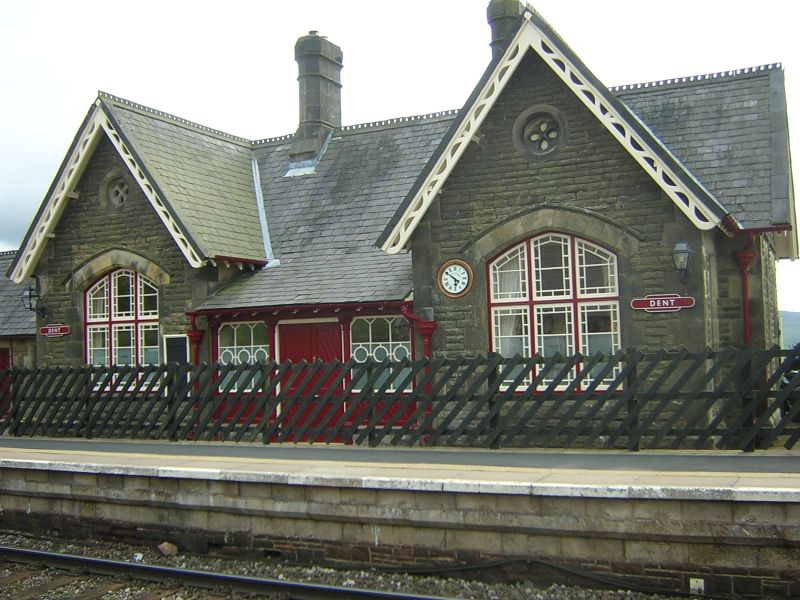 Railway station booking hall, waiting rooms (etc); now in
private ownership and conversion as dwelling in progress at
time of inspection (July 1994). Probably c1870, for Midland
Railway Company; slightly altered. Coursed rock-faced
sandstone with freestone dressings and steeply-pitched Welsh
slate roofs with pierced blue ridge tiles. Linear plan on
north-south axis facing the track to the east, the main range
a modified U-plan with a low wing attached at the south end.
Free Tudor style.
EXTERIOR: the main range has 2 short but large gabled wings
clasping a low single-storey projected centre roofed at a
shallower pitch: this has a central doorway flanked by large
windows with geometrical tracery; and the wings each have a
large segmental-pointed window with a transom and 2 mullions,
all the lights so formed having margin panes, a traceried
oculus above, and oversailing barge-boarded eaves. Two tall
corniced ashlar chimneys on the ridge; gable barge-boarding.
The wing at the south end is one low storey, with a doorway
flanked by a 1-light window to the left and a 2-light
mullioned window to the right. Rear: projected gabled centre
like the wings at the front (window damaged at time of
inspection); 2 tall narrow windows each side, all with
transoms and margin panes. Wing to south has small windows of
1 and 2 lights with very small rectilinear margin panes.
INTERIOR: not inspected. Forms group with Passenger Waiting
Room (qv) on opposite side of track, and with Building (former
workers' barracks) approx. 150m to south-east (qv).