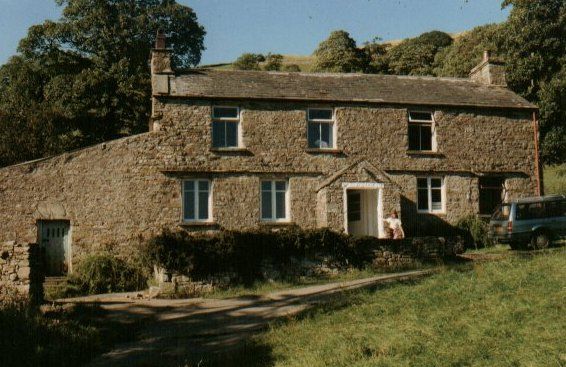 Farmhouse, now dwelling. Early to mid C18; altered, with added
shippon. Roughly coursed sandstone rubble, green slate roof.
Transitional one-and-a-half depth 2-unit plan with almost
full-width rear outshut built back-to-earth, on east-west axis
facing south; lean-to shippon added to west end.
EXTERIOR: 2 storeys and 4 windows (the 4th blocked), with a
sloping plinth to the west half and a plinth of large boulder
stones to the other half, and an interrupted stone slate
drip-course over the ground floor. The ground floor has a
small gabled porch offset slightly left protecting a
square-headed doorway with C20 part-glazed door, two C20
2-light casements to the left and one to the right, and a
recent top-hung casement to the right of that; the 1st floor
has 3 recent top-hung casements and a blocked window to the
right. Gable chimneys. Large lean-to at left end. The rear has
a blocked 1-light fire-window at the west end, but otherwise
has a deep outshut under a catslide roof, blind except for a
doorway in the east end.
INTERIOR: thick stone lateral partition wall to right of
doorway, inserted partition to left; 2 lateral beams in
housepart to left, one axial beam in room to right; stone
staircase in outshut, entered from housepart (but now
separated from it by the inserted partition).
A good example of the transitional one-and-a-half depth plan,
rare in this area.