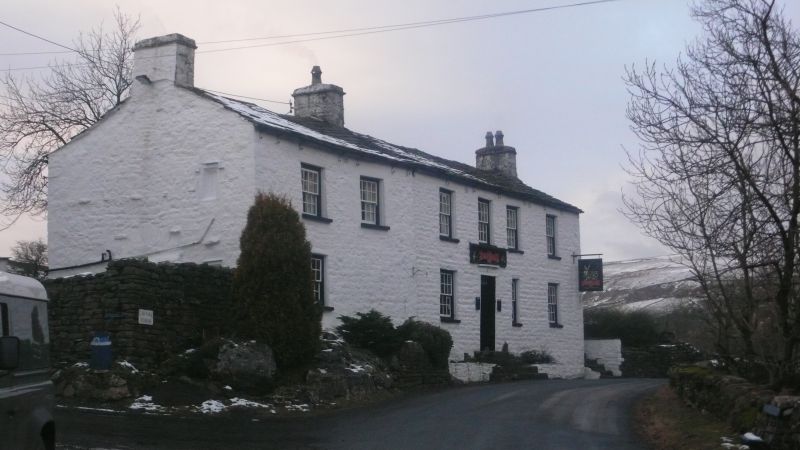 Farmhouse, now public house. Probably late C17 and late C18;
altered. White-painted rubble with quoins, stone slate roof.
Single-depth linear plan on roughly north-south axis, the
earlier portion forming the southern third, plus a large rear
outshut covering part of the earlier portion and all of the
later.
EXTERIOR: 2 storeys, 2:4 windows, the earlier portion to the
left breaking forwards slightly. The later and larger portion
to the right has a square-headed doorway offset left (up 4
re-built steps) with a shallow 5-pane overlight and a narrow
8-pane hornless sashed to its right, and these openings are
flanked by 16-pane hornless sashes; and the 1st floor has 4
similar sashes. The 2-window earlier portion to the left has a
boulder plinth, one similar sashed window offset left at
ground floor and 2 at 1st floor. At each end of the 1st floor
is a metal sign-bracket, that to the right with a painted inn
sign. Ridge chimney and gable chimneys. The south gable wall
(i.e. of the earlier portion), with some through-stones, has a
chimney projection at ground floor only, and a blocked
chamfered 1-light window on each floor near the front corner,
with hoodmoulds. Rear: earlier portion has a blocked 1-light
window on each floor, that at ground floor round-headed with
hollow spandrels, and left of these a former 2-light window on
each floor, lacking mullions.
INTERIOR: altered. Picturesque site overlooking River Dee.