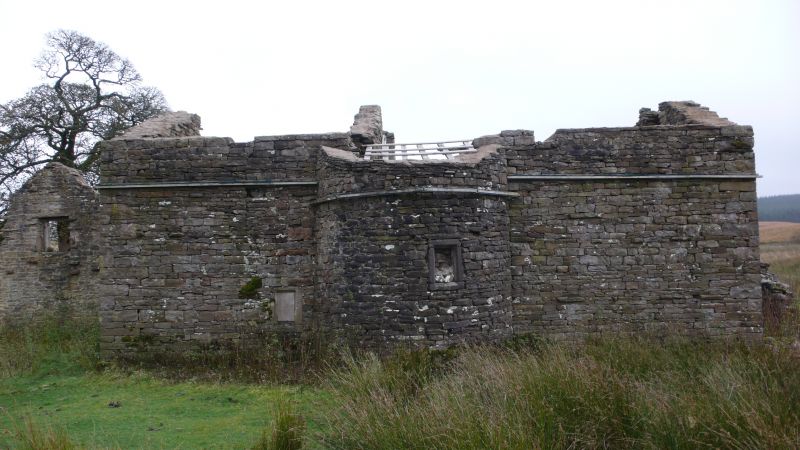 Farmhouse, recently used as store but now derelict. Later C17
(ex situ lintel formerly at East Scale, said to have been
dated 1686); altered. Coursed sandstone rubble, mostly in
alternately thick and thin courses, with quoins; stone slate
roof. Single-depth plan of 2 unequal bays, on
north-east/south-west axis facing south-east, with remains of
a former 2-storey porch at the front and a semi-cylindrical
stair-turret at the rear (both central).
EXTERIOR: 2 storeys and 3 windows, grouped 2:1. In the centre
there is a square-headed doorway at ground floor and a
slightly narrower doorway immediately above, both with slab
lintels, framed by torn masonry and the bases of the side
walls of the former porch. To the left there are two small
formerly mullioned 2-light windows on each floor, those at
ground floor with moulded surrounds and those above shallower
with plain surrounds (that to the left blocked), all with the
stools of former chamfered flush mullions, and holes for
saddle bars in the sills and lintels. To the right an inserted
doorway replaces a former window at ground floor, but the
upper floor has a window like those to the left. Gable chimney
to right, former gable chimney to left missing (neither
corbelled); 3rd bay of roof-ridge sagging badly at time of
inspection (October 1994). Small set-back lean-to attached to
east gable wall. Rear: chamfered 1-light window in
stair-turret (blocked); similar window on each floor to left
(the upper blocked).
INTERIOR: stone lateral partition walls, that to left inserted
under one of 2 chamfered lateral beams in housepart but the
other carried up to the roof; rectangular fireplace in
housepart, recess to left for former built-in cupboard; stone
winder stairs, with very narrow flight continued up partition
wall to former attic; barrel-shaped fireplace in chamber over
parlour but none in that room; collarless principal rafter
roof truss over housepart, with 2 pairs of purlins lapped over
them, and original rafters. Forms group with East Scale
approx. 100m south (qv), in remote and romantically desolate
site at head of Grisdale.