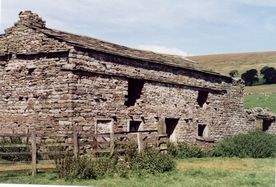 Farmhouse, now derelict and used as store. Earlier C18;
slightly altered. Coursed sandstone rubble with quoins,
graduated stone slate roof. Transitional 2-unit plan, on
south-west/north-east axis facing south-east, with a
contemporary stepped rear outshut to the centre and left under
a catslide roof; and remains of a former barn continued at the
north-east end.
EXTERIOR: 2 storeys, a long range with 2 widely-separated
windows, almost symmetrical; with a continuous stone slate
drip-course (unusually) over the upper windows. The ground
floor has a square-headed doorway offset slightly right, 2
small square windows to the left and one to the right, all
with chamfered surrounds and formerly of 2 lights with
chamfered flush mullions, but all now lacking the mullions and
the first blocked. At 1st floor presumably similar windows
above those flanking the doorway have been torn out, leaving
square holes. Gable chimney to left lacking the upper courses,
former gable chimney to right now missing. Former barn to
right mostly collapsed. Rear: the shallower part of the (to
the centre) has chamfered 1-light stair-window; the deeper
part to the right has former 2-light window at ground floor
like those at the front, and under the eaves above this a
shallower blocked opening with a similar sill.
INTERIOR: lateral stone partition wall at ground floor to
right of doorway terminating at mid-point (the gap presumably
formerly filled by a doorway and cupboard); housepart to left
has chamfered lateral beams with complete sets of joists, C18
corbelled fireplace; stone winder staircase off rear
right-hand corner; former parlour to right, with similar beam
but now open to roof, has small rectangular fireplace with
moulded stone surround. Three principal-rafter roof trusses
made of re-used cruck blades.
This building is a good example of its type and date, in
apparently unaltered state apart from the dilapidations.