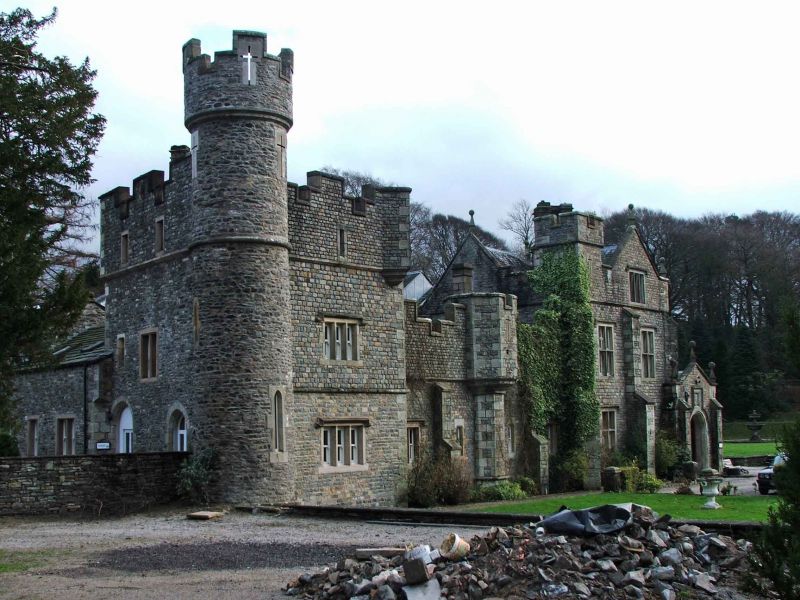 House. Remains of a C16 (in part possibly earlier) mansion
with pele tower, altered and enlarged in the early C19 by
George Webster of Kendal; extended c1900; partially destroyed
by fire in the 1920s and extended again and partially
remodelled in 1989. Coursed rubble with quoins, slate roofs.
PLAN/EXTERIOR: the pre-C19 building appears to have consisted
of a pele (at the N end), a hall range, and a crosswing (at
the S end). The pele is internally ruinous; the hall has
disappeared but the site was marked by Webster with a
crenellated curtain wall which connects pele and wing and
enhances its "medieval aspect". Generally 2 storeys, with
attic to wing. The pele has a tall 3-stage cylindrical
stair-turret at the NW corner, with slit windows and a high
corbelled-out parapet with stepped crenellation; a slit window
at ground floor, a 3-light mullioned window with a hoodmould
at 1st floor, and a high embattled parapet with another slit
window and a corbelled diagonal south-west corner. Its north
side has (inter alia) 2 chamfered doorways of different
heights and arch profiles. To the south extends Webster's
curtain wall, which is symmetrical and vigorously articulated
with high stepped crenellation flanking a large canted
corbelled turret rising from a canted pier in the centre, and
buttresses at ground floor flanked by 1- and 2-light windows.
The crosswing is now the main house, an irregular 2-window
range with central and angle buttresses, cross-windows, a
3-light mullioned window in the gable and a mock turret at the
NW corner. Attached to the south-west corner, and overlapping
it slightly, is the front end of a buttressed gabled porch
with an arched doorway and obelisk-and-ball finials, which has
been rebuilt and extended to the rear. Ridge chimney with
clustered diagonal shafts. The south side of the wing, 2:3
windows in 2 builds, is irregular, with various coupled and
1-light sashes, and gablets with similar finials. Late C20
alterations to rear.
INTERIOR not inspected but the crosswing, although
considerably altered by Webster, appears to contain much early
work.
Set back behind courtyard to N is the stable block and
cottage, L-plan, and medievalised by Webster with a
"gatehouse" which dominates the main range: a wide bay with
octagonal corner turrets flanking a wide 4-centred arch above
which is a 3-light mullioned window. The lower side ranges
appear to incorporate earlier fabric but are much altered; and
attached at the north end is a single-storey 3-bay arcaded
cart-shed.
Forms group with group of farm buildings 100m west (qv) and
with Ingmire Gardens to the north-east (qv).