A Grade I Listed Building in Sedbergh, Cumbria 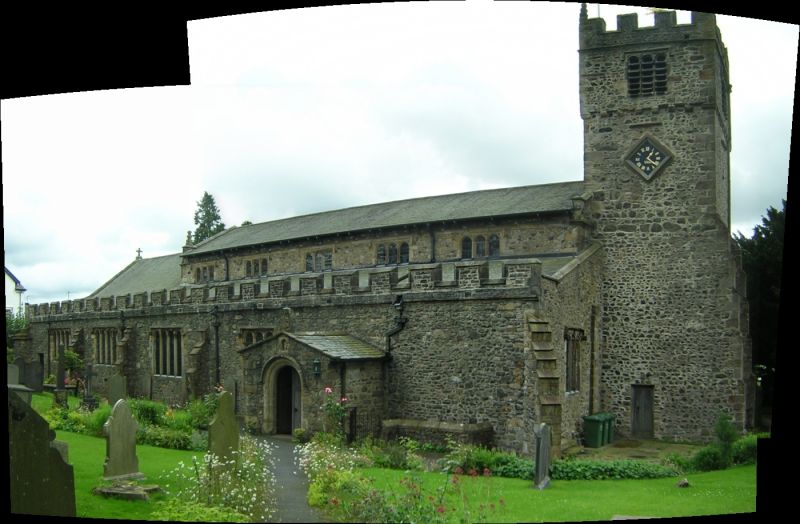 Parish church. Mostly c1500, but incorporating fabric of
various earlier periods; with major restoration 1886-7. Mixed
random rubble with sandstone quoins and dressings, green slate
roof.
PLAN: nave, chancel, continuous north and south aisles which
include south chapel and north vestry; west tower.
EXTERIOR: the square 3-stage tower has west buttresses to half
height, with 4 offsets, belfry stage slightly corbelled out
and embattled parapet with corner pinnacles; a restored
2-centred arched 3-light west window with cusped lights, a
transom and a hoodmould; the hoodmould of a former window at a
high level of the 2nd stage (and a very small opening below
this); and a square-headed belfry window of 3 round-headed
lights with hollow spandrels, with stone louvres and a
hoodmould. The 5-bay nave has clerestory windows of 3
round-headed lights with hollow spandrels and cavetto
hoodmoulds. The long, low aisles have buttresses, cavetto
dripbands, embattled parapets and square-headed 4-light
windows with round-headed lights, hollow spandrels and cavetto
hoodmoulds with figured stops; the south aisle has a gabled
porch to the 2nd bay, with a wide 2-centred moulded arch, a
hoodmould, a small round-headed niche above this, and coped
parapet with ball finial; a large stone sundial over a
square-headed priest door to the chapel, and east of this a
window of 3 trefoil lights. The north aisle has a
corresponding but smaller gabled porch with a round-headed
archway moulded in 2 orders, a cavetto hoodmould, a small
round-headed niche with a statue, gable coping with a large
carved stone finial; and a simple round-headed inner doorway
(said to be Norman). At the north-east corner of this aisle is
an unusual diagonal buttress with an elaborate ogival niche.
The east end has a wide segmental-headed chancel window of 3
round-headed lancet lights, flanked by a 4-light window to the
chapel and a 3-light window to the vestry.
INTERIOR: differing north and south aisle arcades, 6 bays to
the south and 8 to the north, both with mostly cylindrical
piers (those of the north restored) and round arches with
small chamfer, but the piers of the south arcade are much
shorter, its west respond is tripartite with a keeled middle
member, its 5th arch is wider and has double-chamfer, and its
6th arch (to the chapel) is 2-centred; the north arcade has a
rectangular pier opposite the north door, its 5th and 6th
arches, both wider and lower than the others, are
asymmetrical, and the arch on the north side of the chancel is
2-centred; and above the north arcade are 3 blocked windows of
a formerly lower clerestory. Two-centred tower arch flanked at
the top by remains of former round-headed windows. West window
of north aisle breaks into right-hand side of former
deeply-splayed round-headed window. Various wall monuments
between the arches of the nave arcade. C19 pulpit with
restored C18 sounding-board.