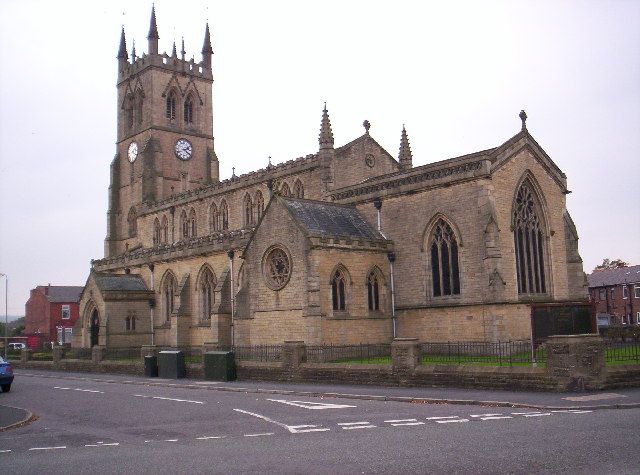 Formerly known as: Church of St James HARDMAN STREET
Poolstock.
Church. 1863-6 (dated 1866 on tower). By EG Paley. Coursed
squared sandstone, slate roofs. Decorated style.
PLAN: nave with west tower, north and south aisles, chancel
with south chapel and north vestry.
EXTERIOR: the large 5-stage west tower, with angle buttresses
up to the 4th stage (those at the south-west corner clasping a
vice), has a segmental-pointed west doorway with moulded
surround, double-doors with large ornamental strap hinges, and
a hood-mould with figured stops (as have all the windows in
the church); a 2-centred arched 4-light traceried west window;
a crocketed niche at the 3rd stage containing the monogrammed
date "1866" (2-light windows in the sides at this level);
clockfaces to the 4th stage; pairs of 2-light gabled belfry
windows with stone louvres; a frieze with ball-flower
enrichment and a pierced parapet with crocketed pinnacles.
Both the high 5-bay nave and its aisles have cavetto cornices
with grotesques between bays, and embattled parapets with
pierced triangular upstands between bays; the nave has a
clerestory of coupled segmental-pointed 2-light windows with
crocketed shafts and tracery alternately mouchette and
trefoil, and large east pinnacles; the aisles are buttressed
and have one 2-centred arched 3-light traceried window in each
bay, except the 2nd of the south aisle which has a large
gabled porch which has (inter alia) a 2-centred arched moulded
doorway with semi-columns, ball-flower ornament, and a
hood-mould with figured stops and crocketed finial. The lower
2-bay chancel, with diagonal buttresses, a cornice like that
of the nave and a parapet of pierced trefoils, has a 2-bay
transept to the 1st bay with a geometrical rose window, a
2-light window to the 2nd bay, and a very large 2-centred
arched 5-light east window with wheel tracery in the head.
INTERIOR: tall 5-bay arcades of slender columns alternately
quatrefoil with annular caps and octagonal with carved
stiff-leaf caps (all different), moulded 2-centred arches with
hood-moulds which have large figured stops (all different);
paired clerestory windows in reveals with free-standing
shafts; carved angel corbels (all different) to arch-braced
king post roof trusses which have open-work spandrels; large
moulded chancel arch; richly-decorated chancel including
ornate reredos, 2 tiers of niches with carved figures flanking
east window (1877), side walls with carved stone panels and
frescoes with painted figures on gilded ground; good stained
glass in chancel and chapel by Hardman of Birmingham.
HISTORY: founded by James and Nathaniel Eckersley (of
Eckersleys Mills, Swan Meadow Road, (qv)).