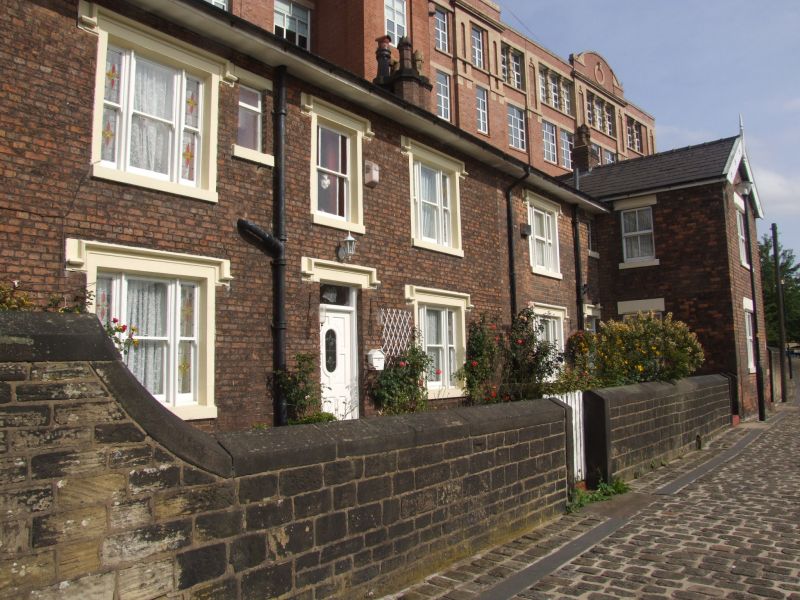 Cottages, associated with Leeds-Liverpool Canal. Probably mid
to later C19. Brick, with slate roofs. T-plan formed by range
parallel to canal with crosswing at south end.
2 storeys, 3+1:1 windows. No.4, double-fronted and almost
symmetrical, has a square-headed doorway with overlight and
hood-mould, a sashed window above with margin panes and
similar hood-mould, flanked by tripartite sashes on both
floors all with hood-moulds (and a small inserted window to
the right of the upper left of these). No.5 continued to the
right has one similar tripartite sash on each floor, a doorway
in the angle with the wing, one window on each floor of the
re-entrant of this and one 2-light sashed window on each floor
of the gable. Shallow-pitched roofs with oversailing eaves and
verges; gable chimney at left end and ridge chimneys to both
ranges.
INTERIOR not inspected.
SUBSIDIARY FEATURE: the attached boundary wall to the front,
of coursed gritstone blocks with rounded coping, is
approximately 1.5m high, ramped up at the left end, and has a
gateway aligned with the front door of each cottage, each with
plain monolithic piers which have rounded tops; and to left of
the ramp a larger but similar gateway; to the left of which
the wall continues.
Forms part of interesting group with Trencherfield Mill (qv)
which towers above to the rear.