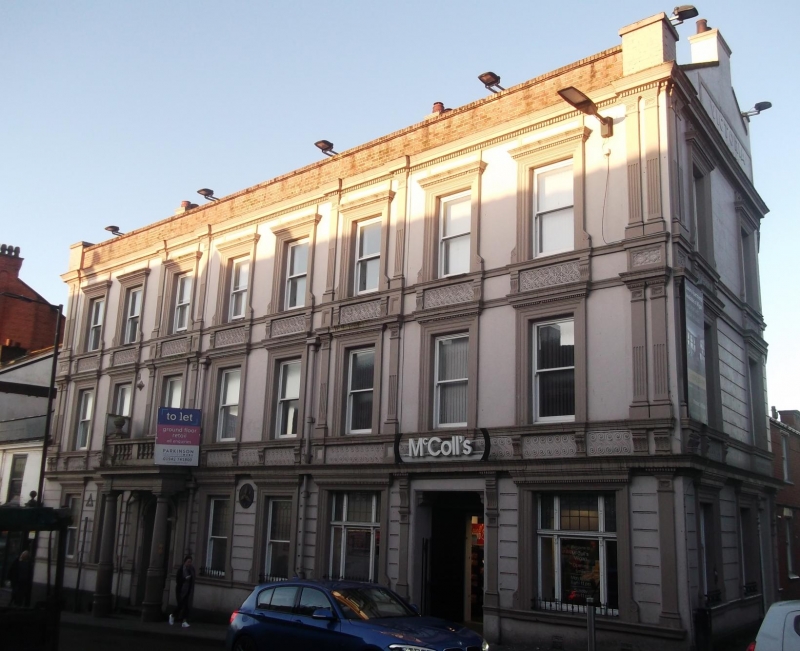 Former Hotel. 1894, by Heaton, Ralph and Heaton; altered. Painted
stucco on brick, with painted stone dressings, slate roof
concealed by brick parapet. Wide U-plan formed by double-depth
front range parallel to street with back extensions.
EXTERIOR: Three storeys over cellars, an 8-window range, formerly
symmetrical; with channelled rustication to ground floor,
super-imposed pilasters to the upper floors (coupled to the
outer bays, single to the 3rd and 6th) and broad bands between
the floors; dentilled cornice and rebuilt brick parapet. The
3rd bay has a Tuscan porch with dentilled cornice and
balustraded parapet with ball finials protecting an
elliptical-headed doorway with pilastered surround and
panelled double doors, and the 6th bay has a window replacing
a former doorway (presumably similar to the first); tripartite
windows flanking this former doorway; otherwise, all windows
are sashed without glazing bars (those at ground floor with
stained glass in the upper leaves) and have emphatic moulded
architraves with scrolled feet and dentilled cornices,
vertically linked by panels of curvilinear patterning in the
bands. INTERIOR not inspected. Forms group with nos. 54 and 56
adjoining to the left (qv).