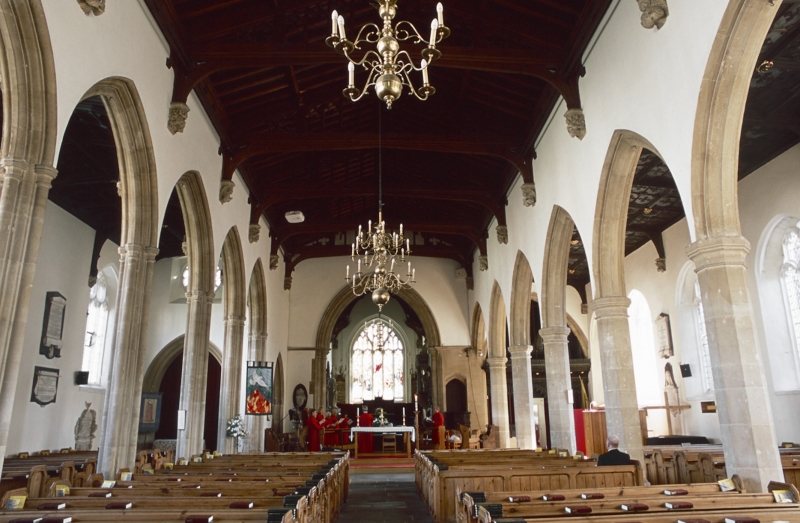 This list entry was subjected to a Minor Enhancement on 21 September 2021 to amend the description, add a reference to selected sources and to reformat the text to current standards

An Anglican parish church originally dating to around 1250-70 with subsequent additions and later repairs and restorations. The south aisle was added in 1390; the south porch and chancel were rebuilt in 1470; restoration was undertaken between 1634 and 1655 after the collapse of the tower and storm damage, including construction of the west tower; a further restoration took place in 1861-63; the roof was restored between 1951 and 1957 and the outer walls restored between 1962 and 1965.

MATERIALS: the church is constructed of coursed and squared rubble with banded ashlar to the tower, ashlar dressings and copings, a plain clay tile roof to the chancel and a slate roof to the nave.

PLAN: the church has an eight-bay nave with north and south aisles, chancel, west tower, south porch and south-east vestry.

EXTERIOR: the church is Decorated and Perpendicular Gothic in style. The chancel has a C19, Perpendicular-style two-centre arched east window with panelled tracery. Its north side has three C13 lancets, one that is blocked. The south wall has a single C13 lancet. The chancel also has ballflower decoration to its cornice and buttresses with set-offs.

The north side of the nave has buttresses with set-offs, a battlemented parapet with weathered gargoyles below and a polygonal turret for the rood-loft staircase. The eastern bay has a two-light, C19 Early English Gothic style window with head stops, then six, Perpendicular Gothic style, pointed-arched windows with three-light panelled tracery and a central north doorway with a plain moulded arch and a plank door.

The tower has three-stages and is Gothic Survival style dating to c1634. It has set-back buttresses, an open trefoil parapet with blank arcading to the corners surmounted by crocketed pinnacles. Its lower stage has the west doorway with plain moulded arch and two-leaf framed door and a four-light Perpendicular Gothic window above. The second stage has two tiers of blind panelling with a C19 cast-iron, Gothic style clock face to the west. The upper stage has two-light bell openings with Y-tracery and louvres and a sundial to the south face under the bell openings.

The south-west wall of south aisle has a five-light, Perpendicular Gothic style window and a blocked doorway below. The south aisle has a blind parapet and three-light, Perpendicular Gothic style windows with dripstones and a polygonal turret for the rood-loft staircase. The south porch has C19 openings but a C14 statue niche above the outer doorway and wrought-iron gates with quatrefoils. Within the porch is a tierceron-vault on recarved corbel heads and a C19 arch to the church interior with a two-leaf C20 door.

There is a small doorway at the south-east corner with C19 plank door and a five-light, Perpendicular Gothic style window to the south-east wall. The chancel has one lancet.

INTERIOR: there is a C19 tie-beam roof to the nave and similar mid-C17 roofs to the aisles but with quatrefoil and lozenge panels; all roofs are supported on carved stone corbels. The chancel has a C19 hammer-beam roof. The seven-bay north arcade has piers of four-waves section and the eight-bay south arcade has octagonal piers with hollow mouldings. There is a Perpendicular arch to the tower and a C19 arch to the chancel.

FITTINGS: the nave has three 1717-21 brass chandeliers given by Ann Tilly; a baluster stem font with circular bowl given by Harry Bridges in 1725; a further 1864 Perpendicular Gothic style, octagonal font with wooden spired cover; a wooden pulpit of around 1655 with blind arcading and diamond-cut decoration; and an 1893 wooden eagle lectern.
The south aisle has a section of the mid-C15, wooden rood screen, moved from the chancel, which survived the fall of north-east tower in 1632: it comprises three-light divisions with panel tracery, a leaf frieze, cresting and coving for the rood decorated with suns. The south aisle also has a burial hatchment high up on aisle wall.
The chancel has a further wooden screen, which replaced the original, now reset between the chancel and the vestry: it comprises a colonnade of round-headed arches and a centrepiece above with terminal pilasters and an achievement of arms to Charles II (1665). The chancel also contains choir stalls and altar rail of 1913. The west tower has five benefaction/charity boards on the south wall.

MEMORIALS: there are wall memorials to the north and south aisles, mostly C18 and C19, with one of 1659 to Joane Flower (of the Flowers of Saltford Manor, listed at Grade II*). The chancel north wall has a monument to Sir Henry Bridges, died 1587: it comprises a recumbent effigy on a tomb chest with caryatids, an arched top on pillars, coats of arms on the back wall and small allegorical figures on the tops of the arches. The south wall has a monument to Sir Thomas Bridges, died 1661 comprising a hanging triptych with a kneeling figure of Sir Thomas in centre and angels to the sides; the three parts are emphasised by four twisted columns which carry open segmental pediments and an apse vault over the centre with carved clouds and angels. There are further C17 and C18 wall memorials to the Bridges family.

HISTORICAL NOTE: The south wall of the west tower has a copy of the 'Brief' of Charles I enabling the church to solicit help from other parishes after the fall of the north-east tower in 1632. The monument to Sir Thomas Bridges is similar in style to that at Rodney Stoke, Somerset to Sir Edward Rodney (died 1657); Sir Thomas's mother was a Rodney.