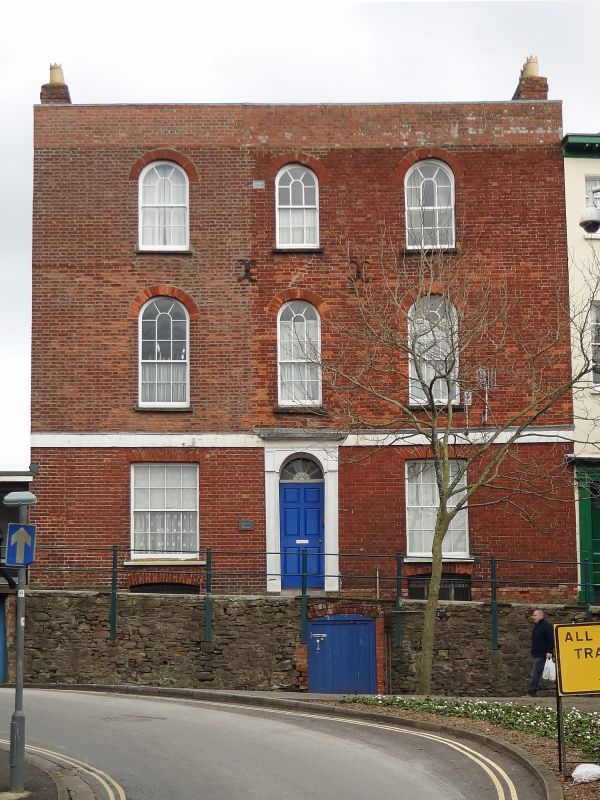 House divided into flats. Late C18. Front wall Flemish bond
brick with some paired headers and some paired stretchers;
side walls local stone rubble, rear wall not seen on survey.
Roof concealed behind new or rebuilt brick parapet; end stacks
with brick shafts with platbands and yellow crested pots.
PLAN: double-depth plan, 2 rooms wide with a central entrance
and axial top-lit stair off the central passage to the right.
Although the stair is renewed, the plan is probably original.
EXTERIOR: prominently-sited on an elevated section of pavement
on Angel Hill. 3 storeys and basement. Symmetrical 3-bay
front. Platband at first-floor level. Tie rods at second-floor
level. Round-headed doorcase with cornice and pilasters with
sunk panels and fielded panelled reveals. Small-pane C20 door
below probably original fanlight with spoke glazing bars.
16-pane sash windows to the ground floor, the left-hand window
horned and probably a replacement. Segmental-headed windows to
the half basement, the left-hand window barred. 3 first floor
round-headed windows, the left one horned and probably a
replacement. Windows glazed with small-pane sashes the upper
central pane round-headed, with wide margin glazing. 3 similar
but smaller second-floor sash windows, the right-hand window
altered with the lower light bottom-hung.
INTERIOR: partly inspected. Stair is a replacement but retains
an archway with a segmental-headed timber tympanum. Most of
the joinery appears to have been renewed.