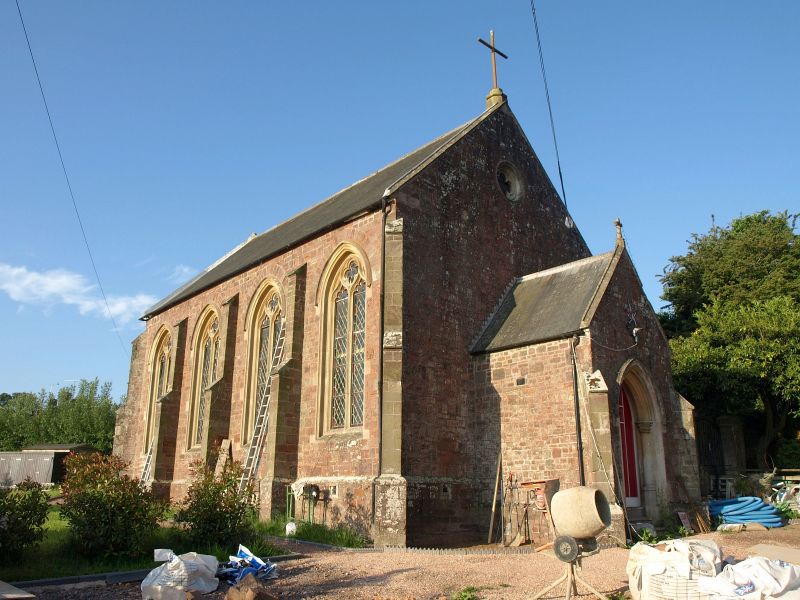 Roman Catholic Church and attached presbytery. 1836-9, to the
designs of GA Boyce, on land given by the Chichesters of
Calverleigh Court. Church in Gothic Revival style and Sion
House in Tudor Gothic Style.
CHURCH EXTERIOR: 4-bay nave and 2-bay chancel, in Gothic
Revival style with offset buttresses and hoodmoulds over
windows and west door. Chancel has cinquefoil-headed lights,
and 4-light east window with elaborate rose above similar
lights. Nave has 2-light windows with quatrefoils above
cinquefoil-headed lights; small quatrefoil light in west
gable, above porch with offset corner buttresses and pointed
moulded arch set on engaged shafts.
CHURCH INTERIOR: has shallow 4-centred arch braces to ceiling;
coloured glass borders to windows.
PRESBYTERY EXTERIOR: of 2 storeys, symmetrically composed with
double-gabled west front; this has flat-headed Gothic-style
windows, the upper tier distinguished by the mouchettes set
above ogee-arched cinquefoil-headed lights. Other elevations
have mullioned windows, the left-hand gable adjoining the
church having a crest set above mullioned windows with
C16-style pointed-arched lights.
PRESBYTERY INTERIOR: not inspected.
A distinctive group by a notable local architect.
(The Buildings of England: Pevsner N: Devon: 1989-: 811).