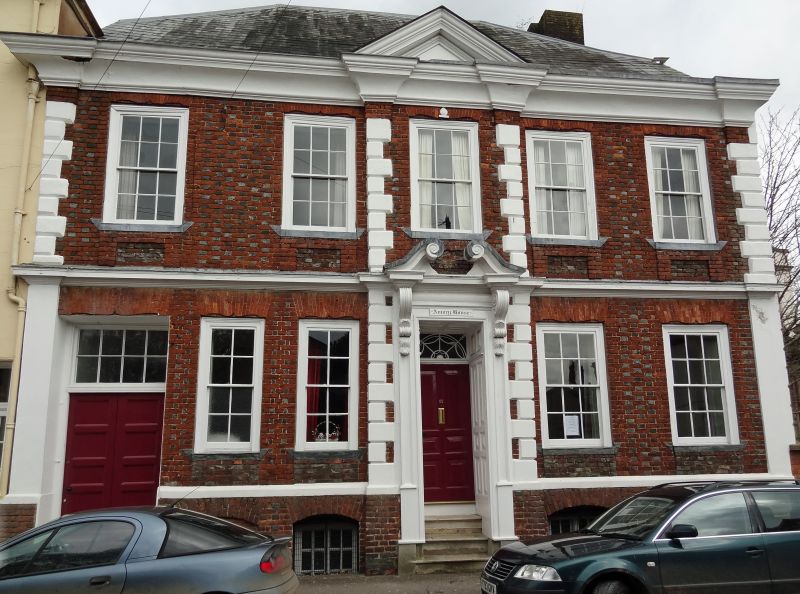 Community centre for elderly people, formerly a private house.
About 1700.
MATERIALS: front and back walls of red brick, laid in Flemish
bond with vitrified headers. Rusticated quoins and coping of
plinth are painted; probably of stone underneath. Door case,
string course and eaves cornice of wood. Right side wall of
plain red brick, all but the gable end refaced in C19. Slated
roof, half-hipped each side. Red brick chimney on each side
wall, that to right (the only one visible from street) with
rebuilt top.
PLAN: double-fronted, double-depth. Front of ground floor
divided between 2-window room to right and entrance hall with
staircase to left. A small room has been inserted to left of
front door. Rear part originally one long room, now divided
into 2. On left side a through-passage with separate entrance
from street. This extends beyond the house as a weatherboarded
lean-to which was used as a waiting room for a doctors'
surgery added on at the rear of the house. Semi-basement (with
former kitchen in right-hand front room). First floor and
garret have 4 room plan.
EXTERIOR: 2 storeys with semi-basement and garret. 5 windows
wide, the middle window and front door in a slight projection
with triangular pediment above the eaves. Rusticated quoins at
either end of front and on centre projection; the rustication
appears to have been cut back at the ends of the ground
storey. Moulded string course above ground storey. Window and
side doorway in ground and second storeys have flat gauged
arches, the lower edges of which are cut to a double ogee
shape; panelled aprons below the window in the ground storey,
lugged ones (with exaggerated lugs) in second storey.
Flush-framed sashes of 6 panes each, except for 2 narrower
windows to left of the front door, where the sashes are
4-paned. Semi-basement windows have plain segmental arches;
that to left blocked with brick, the other 3 with small paned,
2-light wood casements. Front door, approached by 4 steps, has
moulded architrave, pulvinated frieze and prominent,
swan-necked pediment on consoles.
Door has 6 raised and fielded ovolo-moulded panels and is
deeply recessed within similarly panelled reveals and soffit;
tracered `cobweb' fanlight, probably inserted in late C18 or
early C19.
Side doorway has double doors, each leaf with 4 ovolo-moulded
panels; 8-paned overlight above. Inset beside each of the 2
doorways is a C19 cast-iron shoe-scraper. Deeply coved,
moulded eaves cornice, breaking forward in 4 places above the
rusticated quoins; the middle 2 projections carry a triangular
pediment.
Right return is blank, apart from 2 segmental-headed garret
windows, the left one widened, probably in C19; 2-light wood
casements with 2 panes per light. Above them a moulded wood
cornice, following the line of the half hip.
Rear wall has original 4-light basement window with
lightly-moulded, square wood mullions. Ground and
second-storey windows have barred sashes: 2 triple-sashed
windows below and 3 single-light ones above. Gable dormer with
2-light, small-paned wood casement.
INTERIOR: ground floor front room has raised bolection-moulded
panelling and simple moulded plaster ceiling with oval entre
panel; ovolo-moulded panelling and shutters. Segmental arch
springing from square columns between hall and staircase.
Latter is of wood, rising from semi-basement to garret; open
well, closed moulded strings, twisted balusters, flat moulded
handrail, square newels with flat moulded caps and moulded
pendants, foliated plaster ceiling boss. On first floor, the
landing has ovolo-moulded panelling and 2-panel doors. Some
alteration of internal partitions. Original wooden
chimney-pieces in left front and right rear rooms, the latter
bolection-moulded.
Carved and moulded early C19 door frame in right front room,
which has a Victorian chimeny-piece. In garret, and front
right and rear right rooms have wooden chimney-pieces with
eared, moulded architraves, shaped frieze and moulded cornice.
Cupboards preserve probably original cocks-head hinges.
Roof timbers mostly concealed, but collars have shaped
strengthening pieces nailed on, in the manner of arch braces.
Above the attic floor (at collar level) a king post rises from
collar to apex. Brick floor to former basement kitchen,
fireplace removed (scar visible).