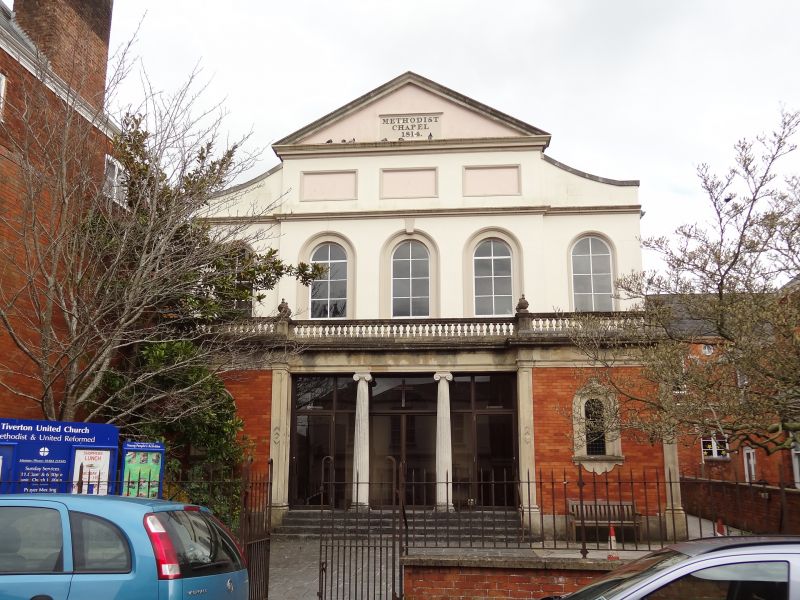 Methodist church. 1814 (datestone), with later alterations,
including 1904 (Pevsner) portico across front. Stuccoed, the
portico stretcher bond red brick with Bathstone dressings and
columns. Roof concealed behind parapet. Attached 1876
(Pevsner) school is Flemish bond brick with stone dressings.
PLAN: set back from the road behind a small paved area;
rectangular plan with projecting portico along front.
EXTERIOR: 5-bay front with pedimented gable, centre 3 bays
slightly broken forward. The later projecting portico has
steps up to 3 recessed open bays in the centre (glazed in the
late C20) with fluted Ionic columns. The outer bays are brick
with stone pilasters and round-headed windows with stone
architraves, keyblocks and stone aprons, glazed with square
leaded panes. The portico has a stone entablature with
modillion frieze, moulded cornice and balustraded parapet with
ball finials. The earlier section of the chapel has 5
round-headed windows, the centre three with recessed arches,
the centre window with a keyblock. Above the cornice the
centre 3 bays have recessed panels below the pedimented gable,
which has a datestone of 1814. The outer bays have a parapet
that ramps up to the gable.
The right return is stuccoed and blocked out with 2 tiers of
round-headed windows with glazing bars. The school to the rear
is parallel to the street and has a 4-window front with an
open porch to the left with a deep cornice on columns and a
2-leaf door with glazed leaves. Large cornice at first-floor
level, the ground-floor windows with nowy-headed cornices on
triglyph brackets. Windows glazed with 2-pane casements, 3
panes per light. First-floor windows have continuous
nowy-headed cornices with keyblocks and small bull's-eye
windows in the spandrels. Fixed 6-pane glazing.
INTERIOR: not inspected but Pevsner records original galleries
on iron columns on 3 sides and a late C19 organ recess with
two Ionic columns in antis.
HISTORY: the 1972 description records that one of John
Wesley's original congregations met on this site. Pevsner
states that the chapel was originally approached by a narrow
passage.