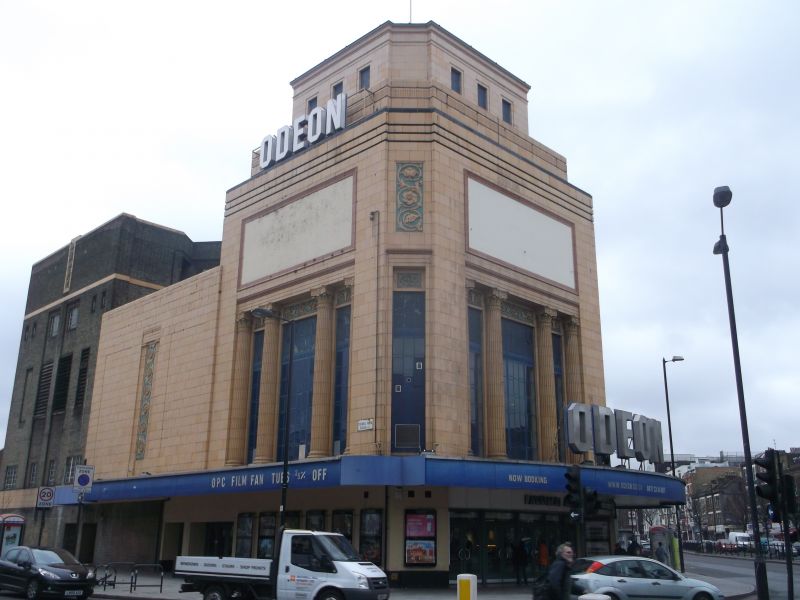 Cinema, built 1937-8 as the Gaumont by the Gaumont-British Picture Corporation in conjunction with one of their subsidiary companies, the General Theatre Corporation.
Architect: C. Howard Crane (1885-1952) of Chicago. Following bomb damage in World War II, the cinema was internally reconstructed in 1958, when the architects were T.P. Bennett & Son. The auditorium block is not of special interest internally.

Buff, green, brown and black faience, with brown brick, roof of copper on the tower, but roofs over the auditorium and foyer block not seen. The building stands on a wedge-shaped site, and the description falls into four parts: a tower, rectangular in plan, on the corner of Holloway Road and Tufnell park Road, faced with faience; a lower wing to the tower, also faced with faience, on Tufnell Park Road; a parade of shops in Holloway Road; and the main auditorium block, of brick.

EXTERIOR: Curving entrance on the corner of Tufnell Park Road and Holloway Road with a canopy over, which returns down Tufnell Park Road; tripartite window above the entrance with engaged fluted columns with palm leaf capitals and a frieze of scrolling ornament between the columns; there is a similar window on the Tufnell Park Road side of the tower, but on the Holloway Road side the window is single with the engaged columns in the reveals; original decorative metal glazing. Above this, panels edged by brown faience; the chamfered, slightly inset corners of the tower have windows with original metal glazing and vertical panels of arabesques above; frieze of three narrow recessed bands below parapet which is coped with black faience; attic comprising one low set-back with fluted frieze; second higher set-back with three blind windows to each side; entablature to top parapet; shallow hipped roof with flagpole. The lower, faience-covered wing in Tufnell Park Road has a vertical inset panel of arabesques flanked by fluted pilasters. The shops in Holloway Road are faced in faience and are interspersed with exits; frieze of green faience below the parapet and an open arcade with cornice over, fronting what was originally a terrace cafe. The shop fronts have been renewed and are not of special interest, although the overall composition of faience columns and terrace frieze is an important decorative scheme. The brick auditorium wing at the rear of the site has sparing use of faience decoration. The architectural interest of the site is concentrated in the foyer block and in the elevation to Holloway Road.

INTERIOR: Double-height galleried foyer, with a semi-circular end facing the entrance. Stair at the apsidal end with an octagonal newel-post and squat column-on-vase balusters; closed string decorated with Rinceau, brass handrails; at gallery level the walls are divided by Corinthian pilasters singly and in pairs to the sides, and Corinthian columns to the apsidal end, with bands of latticework and fluting between; valences to windows and other openings; two large panels of mirror-glass with Modern metal grills and another panel with glazing imitating the windows. Full entablature with triglyphs and paterae, modillion cornice with mutules; the plaster ceiling decoration follows a semi-circular pattern at the inner end having a broad band of fluting and a narrow band of ornament, cartouches and paterae. First floor crush hall with Corinthian pilasters, frieze of swags, fluted frieze and cornice; plaster ceiling decoration with ogee patterned ribs. The former caf? area has been adapted as an extra screen, but the decorative scheme is thought to survive behind the partitioning. The auditorium has been subdivided into smaller cinemas and is not of special interest.

ANALYSIS: Originally, the Gaumont was one of the most spectacular of Britain s super-cinemas; while the auditorium has been lost, its external impact is still greater than almost any other cinema, an example of trans-Atlantic bravura. Prominent in the field in the USA, C. Howard Crane designed the stupendous Fox cinemas in Detroit and St. Louis and was also amongst the team of architects and designers responsible for the Radio City Music Hall in New York. Crane was only one of two leading American cinema architects to work in Britain; Thomas Lamb's Empire, Leicester Square, has, however, been gutted. Crane was also the architect of the Earl's Court Exhibition Hall. Included for the exceptional quality of the principal elevations and foyer areas.