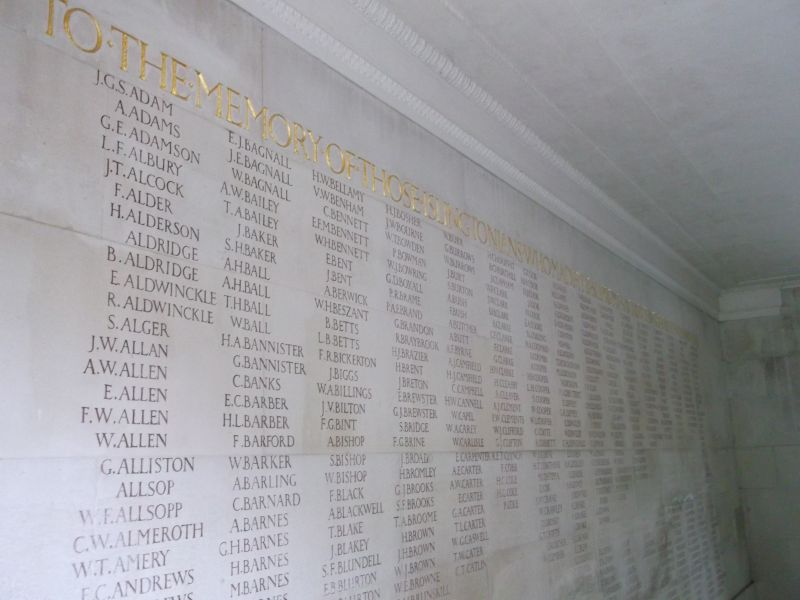 II
War memorial arch. 1923. Designed by Percy Adams FRIBA. Red brick with Portland stone dressings.
DESCRIPTION: the arch and window over are all that survive of the casualty department of the Royal Northern Hospital. The inscribed foundation and dedication stones at plinth level are set behind rounded granite bollards. The segmental archway is surrounded by rusticated quoins: above is a 16/9-pane sash window set within an aedicular surround with a console hood over, while the cast iron balcony is flanked by palm-enriched volutes. Behind the iron gates, on either side of the archway, are inscribed Portland stone walls bearing the names of the borough's 1,307 war dead. On each side is the inscription 'TO THE MEMORY OF THOSE ISLINGTONIANS WHO MADE THE SUPREME SACRIFICE IN THE GREAT WAR 1914-1919'. A separate plaque reads: 'RNH / BOROUGH OF ISLINGTON WAR MEMORIAL / This Building was erected by Public Subscription raised in the Borough of Islington to commemorate the Supreme Sacrifice made by those who fell in the Great War and the brave deeds of those who were spared. / 1914-1919'.
HISTORY: the arch formed part of the Islington war memorial, which took the practical form of an additional ward to the Royal Northern Hospital. Such utilitarian memorials were not uncommon at this time. The foundation to the new casualty department was laid by Lady Patricia Ramsay in July 1923, and the new building was opened by the Prince of Wales on 27th November 1923. The hospital was closed in 1992, and the site redeveloped by Bellway Homes: the arch was retained as a memorial to the dead of the borough.

The memorial arch dates from 1923. Designed by Percy Adams and unveiled by the Prince of Wales, it is all that remains of the main Islington war memorial: a new ward for the Royal Northern Hospital.