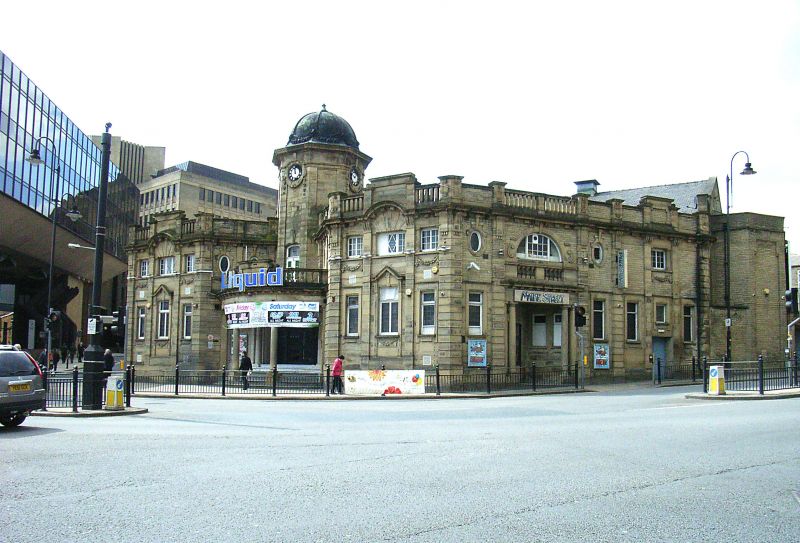 EXTERIOR:, 3;5;3 windows to front. Curved projecting steps up to central recessed renewed glazed entrance in wide segmental arch with many keys; slender Tuscan columns and half-columns support entablature of curved porch with dentilled cornice and top balustrade. Octagonal tower, with angle pilasters and top entablature, rises above entrance and has a segmental head to a door opening to a balcony. Keyed oeils de boeuf in front and sides, with long keys rising to prominent cornice; high ogee dome with masks above base of dome, and ball finial. Flanking bays canted forwards with two similarly keyed oval windows above balcony formed by porch roof. Outer bays defined by giant pilasters, the outer pair rusticated and the inner pair supporting raised segmental cornice of the continuous entablature. Triple central and paired outer lights. The central on ground floor with keys and pediment, and like the outer on the first floor with swagged sills; central on first floor has tall voussoirs. Roof parapet with angle piers and central panels. Roof not visible except for ridge of fly tower with coped square ridge ventilator. Left return in plainer style, right return more decorated with canted recessed entrance to ground floor below balcony and Diocletian window. Small yard to north of fly tower has high walls with flat stone coping.

INTERIOR: Has original staircase at front; auditorium and balcony have inserted partitions and decoration which obscures original decorative scheme, which nevertheless survives.

ANALYSIS: Included as a good example of an early purpose-built cinema. Externally the building has hardly changed while the interior, although altered for its present purpose, retains many original features. Prominently sited, the cinema was designed as a major contribution to the grandeur of Halifax town centre and forms an architectural group with the listed Civic Theatre, the former Victoria Hall of 1901. The principal and right-hand facades of the cinema are rich examples of the Edwardian Baroque style. The architect, obviously well versed in this vocabulary, created dignified facades which are also eye-catching and festive enough to express the new entertainment medium. Closed as cinema in May 1982.

REASONS FOR DESIGNATION
The former Picture House, Commercial Street, Halifax, is designated at Grade II for the following principal reasons:
* Architecture: it is a well designed and competently executed example of Edwardian Baroque, expressing the spirit of the new entertainment medium while retaining a level of dignity that blends well with its surroundings
* Historic: it is a good example of an early purpose built cinema
* Intactness: despite its change of use it remains virtually unaltered externally and retains many original features internally
* Group value: it forms a major architectural contribution to a group of listed buildings including the Civic Theatre and the Former Victoria Hall, adding to the grandeur of Halifax