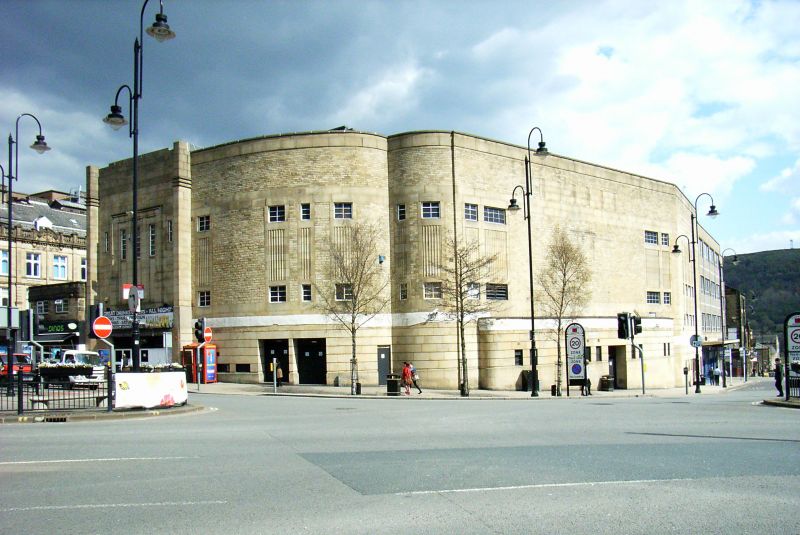 EXTERIOR: Entrance has vertical tiles on curved sides framing three pairs of renewed glass doors; fascia projects in two stages. Above, ashlar panel has projecting end fins acting as pilasters with bands in place of capitals; nearly full width projection contains triple lights set in architrave; long fluted aprons to these windows which have horizontal metal glazing bars; small narrow lights flank this group. Roof parapet has central projecting block. To the left of entrance block, a shop has plate glass window below deep fascia in green vitrolite; above, two windows of two lights under deep ashlar frieze and flat coped roof parapet. Behind this the curved wall of the cinema rises to full height and has a single window at third storey level. To right of entrance the ground floor is of rusticated ashlar with deeply recessed openings for two emergency exits and hatches. Above, windows are in two-storey panels, with fluted decoration joining lower and upper windows and with a deep ashlar lintel band; from this a second curve with two lights breaks forward to join the right return. Windows one and two lights with metal horizontal glazing bars. Rendered patching to first floor by the continuation of the broad band of green vitrolite; metal framed two and three light windows to first floor. Right return to Ward's End has canted wall with large blank centre space; either side are window panels with two and four lights. Ground floor level projects as curving wall with symmetrical arrangement of deeply recessed exit door at centre flanked by two sets of single-light paired windows. At extreme right another ashlar panel with five windows with one, two and three lights.

ANALYSIS: Despite subdivision, the auditorium remains a good example of an elaborate William Glen interior where e combined the Moderne with historical styles. Virtually all the cinemas built by Associated British Cinemas in the 1930s have now been drastically altered or demolished, making this one, with much surviving original decoration, a rarity. The unusually bold fortress-like exterior adds to the interest of the building.