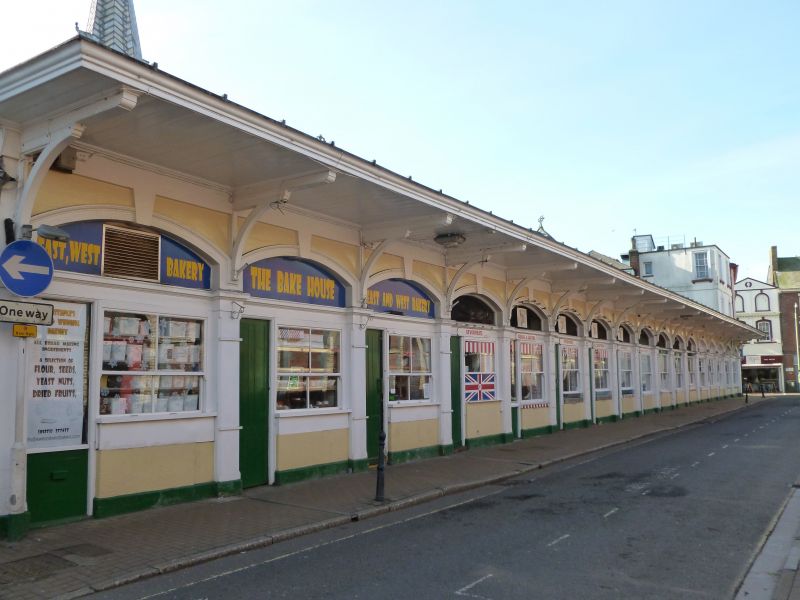 Formerly known as: Nos.1 TO 33 BUTCHERS ROW.
Originally 33 butchers' shops, now amalgamated to form 11
shops with a 12th at the back, opening on to Church Walk; only
4 of them still occupied by butchers. House built above W end,
1855. By RD Gould of Barnstaple.
Bath stone, now painted; the house rendered. Hipped slated
roofs; flat leaded canopies in front.
The shops are arranged in 2 groups separated by the entrance
to Church Walk. Each has a 10ft 10in frontage, is about 14ft
high and has a 7ft canopy in front. Above W end is a
2-storeyed house. There was from the first another house at
the E end; this is separately listed as No.96 Boutport Street
(qv). The pavements under the canopies were originally entered
through arches at each end, and there were matching arches on
the N side. These were demolished in 1961.
One storey, except for 2 additional storeys to house at W end.
Designed in the form of an arcade with 17 arches in the
right-hand range and 18 in that to left. The arches are
segmental-headed with short vertical sides, and spring from
square chamfered and stopped piers; arches have moulded
archivolts and keystones which merge at the top into a raised
band. Immediately above this is a moulded wooden canopy
carried on arch-braced brackets.
The shops have sash windows, most of them with a single
upright glazing bar, and a plank door divided so that the
short lower section can be shut while the upper part remains
open. The 2 west arches contain late C20 display windows. The
house above them is 2-window range, these having moulded
architraves with keystones in the lower storey; 2-paned sashes
with margin-panes, except for the left lower storey window,
which has French window. Raised band between the storeys.
Similar sash window with architrave in upper storey facing
east.
Side walls of the ranges facing Church Walk have similar
arcading to the shops, except that the arches are round;
moulding of canopy is carried round as an eaves cornice. 2
arches to east, 3 to west. All are blind except the southern
arch on W side, which opens into a small shop: half-glazed
double doors with flush lower panels.
(Gardiner WF: Barnstaple, 1837-97: Barnstaple: 1897-: 49-50;
Lamplugh L: Barnstaple, Town on the Taw: Chichester: 1983-:
122, 126, 148; Baxter J & Baxter J: Barnstaple Yesterday:
Bristol: 1980-: 146, 148-9).