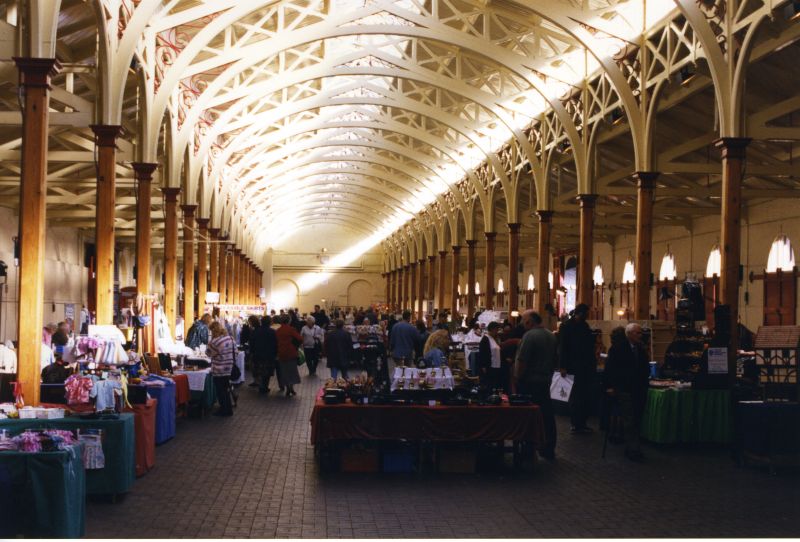 Formerly known as: Market MARKET PLACE.
Market building. 1855. By RD Gould of Barnstaple. Red brick
with dressings of yellow and blue brick and Bath stone. Slated
roof with full-length, partly glazed lantern down the centre.
A single long room extending almost the full length of
Butchers' Row, from the Guildhall (qv) on the west to Queen's
Hall (not included) on the east. Former corn market adjoins
rear at right-hand end.
Single storey. Front to Butchers' Row arcaded from end to end
with 20 round-arched doorways, the 12th doorway from the left
slightly wider and set in a slight projection. Doorways have
keystones and continued imposts of Bath stone; all but the
wider doorway have recessed inner surrounds of yellow brick
and a 5-paned fanlight. Above the arches a raised Bath stone
band surmounted by a brick parapet with stone coping. Between
the arches are rainwater pipes with town arms and date 1855 on
the heads. Attached to the keystone of the wider doorway is a
lamp on an enriched iron bracket. At rear, opening into Market
Street, is a wide doorway matching that at the front.
INTERIOR: has a nave and aisles with 19 pairs of chamfered
wooden posts supporting the roof trusses. The posts have
moulded capitals from which spring arch-braces supporting 2
tiers of principal rafters, these being linked by
diagonally-braced panels in the form of St Andrew's crosses;
iron scrollwork in the spandrels of the arches. Between the
posts on each side are similarly-braced panels, the uprights
of which are finished with small moulded pendants; arch-braces
with scrollwork in the spandrels again support them and above
them runs a clerestory. The aisles have lean-to roofs with
complex chamfered bracing and behind the purlins is
diagonally-set boarding.
At the west end the wide entrance into the Guildhall has a
doorway designed like a Venetian window with 2 chamfered posts
supporting a segmental-headed centre opening; over all 3
openings is a massive patterned fanlight. Flanking the
entrance are 2 pairs of round-arched windows with continued
brick imposts; the left-hand (south) window, which is slightly
taller than the others, is blocked.
At the east end of the market is a series of similar arches,
now blocked, which opened into the corn market prior to the
building of Queen's Hall. In the rear (north) wall, east of
the exit to Market Street, is a row of 5 round-arched doorways
leading into the later corn market. This has its original roof
with chamfered trusses supported by an elaborate system of
iron braces. In the west wall is a giant Venetian window with
moulded cornices and archivolt to the lights. The centre and
left-hand lights retain barred sashes, the head of the centre
light taking the form of a fanlight with radial bars.
The Pannier Market stands on the site of the Butchers' Market,
erected in 1812 with the Corn Exchange above. The old building
extended back only as far as Anchor Lane (now Market Street).
The new one was carried right to Boutport Street, the rear
section (now Queen's Hall) forming the corn market with a
music hall above. At the same time a new street (Butchers'
Row) was cut through on its south side with butchers' shops
opposite. In 1864 the Pannier Market, which already extended
under the Guildhall, was continued into the corn market, the
latter being moved to its existing site on the north.
(Gardiner WF: Barnstaple, 1837-97: Barnstaple: 1897-: 49-51;
White W: Directory of Devonshire: Sheffield: 1850-: 567).