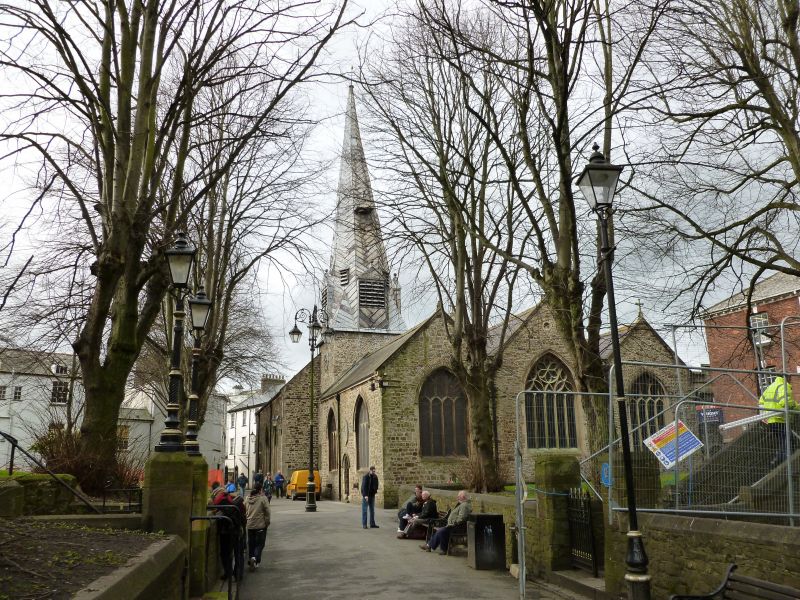 Entry Name: Church of Saints Peter and Paul church of St Peter Including the Doddridge Library

Parish church. Probably late C12 or early C13, enlarged 1318.
Spire added 1388-9; Doddridge Library 1667. Restored by
Gilbert Scott from 1866 onwards, and by JO Scott in the 1880s.
Tower, nave and chancel of random stone rubble; aisles,
chancel chapels and Doddridge Library of coursed rubble.
Limestone details. Slated roofs. Ribbed leaded spire.
PLAN: nave: N and S aisles; N transept with tower in place of
S transept; chancel; N and S chancel chapels; Doddridge
Library adjoining N chancel chapel with entrance from Church
Walk. Mostly Perpendicular windows restored in C19. EXTERIOR:
Tudor-arched windows in N aisle. C19 S door with pointed arch;
above it a blank panel in old Perpendicular surround with
cinquefoil arch. Smaller S chancel door of similar date; above
it an octagonal sundial with gilt lettering, including date
1732. Twisted broach spire with louvred belfry openings; these
have triangular pediments with ball finials, 2 of the
pediments dated 1636. Higher up on the E and W side are small
gabled canopies, that to E with 2 bells.
Doddridge Library has Tudor-arched doorway and 3-light
stone-mullioned window with cinquefoiled heads to the lights,
both probably C19. Upper storey has 2 windows, each of 3
lights with restored ovolo-moulded wood mullions. Between them
is a moulded plaque inscribed BIBLIOTHECA DODDRIDGIANA 1667.
The front is finished with a pair of moulded string courses
having ashlar masonry between them and above them a
crenellated parapet carved with quatrefoils and the town arms.
INTERIOR: has C14-style nave and chancel arcades designed by
Scott (carving by Harry Hems). Tower has two C14 pointed
arches with quarter-round mouldings. Waggon roofs throughout,
that to chancel boarded and with angels. Chancel and S chancel
chapel have medieval niches with trefoiled heads, presumably
piscinas originally; the second of these is unusual in having
small side-niches with pointed heads.
FITTINGS: C19 Gothic pulpit and font, the former with re-set
medieval Barnstaple tiles beneath it. Organ with Gothic case
and painted pipes, 1882 by JO Scott. Stained-glass tower
window by Clayton & Bell; W window by WF Dixon.
MONUMENTS: numerous C17 wall monuments, mostly to Barnstaple
merchants; many have busts or whole figures in high relief.
These include in N transept Thomas Horwood (d.1658),
founder of the almshouses in Church Lane (qv).
BELLS: 6 by John Briant, 1803; 2 Barwell trebles added in
1897. Restored 1980.
Doddridge Library has part of a double-rib ceiling upstairs.
(The Buildings of England: Cherry B: Devon (2nd edition):
London: 1989-: 150-1; The Ringing World: 1980-; Some notes on
the Parish Church of St Peter, Barnstaple).