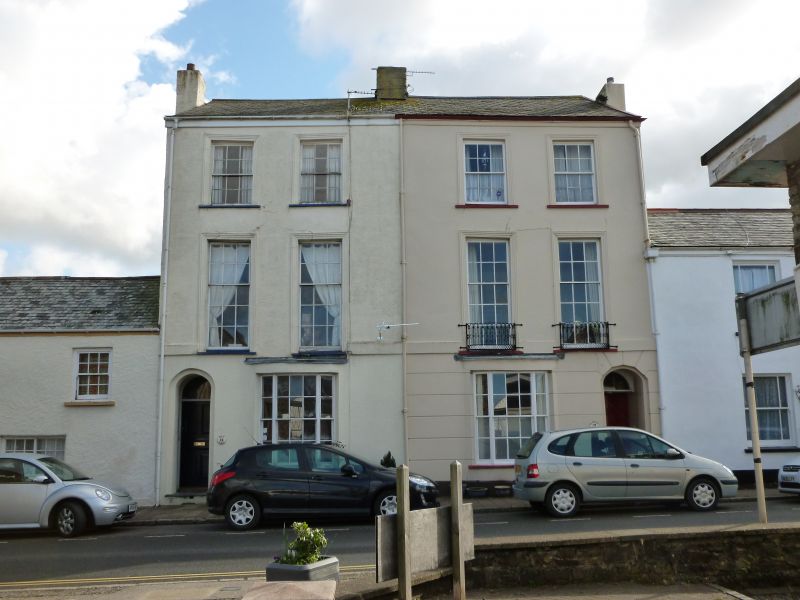 Mirrored pair of houses. Early C19. Solid rendered fronts.
Slated roofs. Red brick chimney on centre of ridge. Rendered
chimney on each side wall. 3 storeys. Each house 2-window
range. Round-arched doorways at outer ends of ground storey;
recessed surrounds; 6-panelled doors, that at No.5 late C20,
set well back, the open porches in front of them with
groin-vaulted ceilings; No.6 has a projecting, semicircular
fanlight with panelled soffit. At No.6 the whole ground storey
has horizontal channelling, the doorway with voussoirs marked
in the cement; however, the arch is so clumsily done as to
suggest this is not an original feature. Each ground storey
has a recessed bow window (apparently original) with triple
sashes, 6 over 6 panes in centre, 2 over 2 panes at sides.
Upper-storey windows have moulded architraves, those in 2nd
storey dropping to cut into a raised band above the ground
storey; 6-paned sashes, except that the lower 2nd storey
sashes are 9-paned. At No.6 the 2nd-storey windows have bowed
iron guard-rails with Gothic detail. Moulded board below the
eaves. INTERIOR not inspected. An elegant pair of
semi-detached houses.