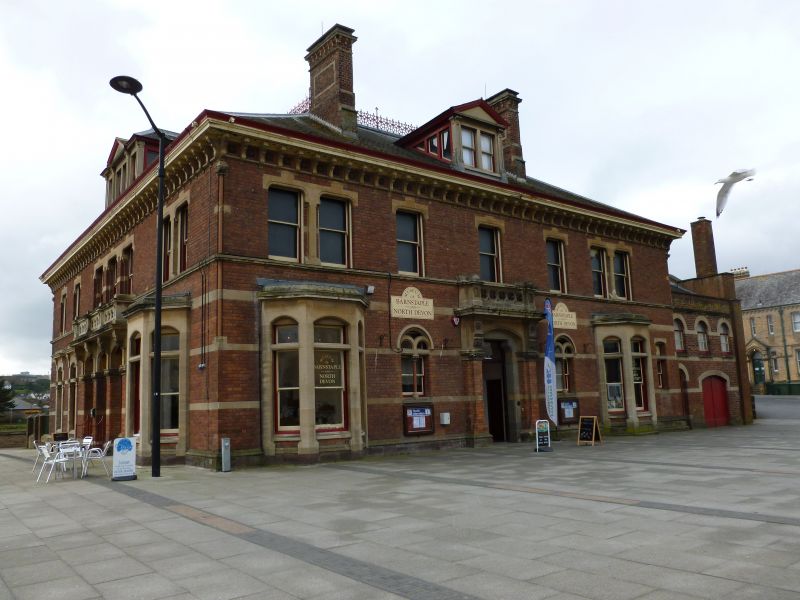 House, later library, now museum. 1872. Red brick with
dressings of stone and terracotta. Hipped, slated roof, the
flat centre guarded by ornamental iron railings. 5 red brick
chimneys with moulded, bracketed stone caps.
Plan: square, built round an internal courtyard. To right (on
N side) a small service wing (probably a coach-house) with
walled courtyard behind.
EXTERIOR: 2 storeys, the main house with garret. Front to
square is 7-window range. Ground storey has centre doorway
with pilasters having foliated stone capitals; above is a
stone hood on large carved brackets. 6-panelled door. At
either side a recessed sash window having in front of it a
stone column supporting 2 round-arched transom-lights under a
single round arch. Canted bay window at either end. Upper
storey has sash windows with moulded stone lintels, rounded at
the corners. Stone balcony with open tracery in front of
middle window. Ground storey has 3 horizontal stone bands.
Continued moulded cills in 2nd storey. Inset stone shaft with
foliated capital at each corner. Bracketed eaves cornice with
terracotta panels between the brackets.
The other 3 fronts are similar in character, the best being to
the left (facing S) and at the rear (facing the river). The
latter front has terracotta panels and, at the right-hand end,
a bow window having a string course carved with heads and
heraldic shields.
INTERIOR has several rooms and lobbies with enriched cornices
and chandelier bosses. Open-well, wooden staircase in Jacobean
manner with twisted balusters and large carved newels. Glazed
inner doorway and screen with decorative woodwork, probably of
the 1880s. Gothic stone chimneypiece in entrance hall.
SUBSIDIARY FEATURES: at the rear, facing the river, is a small
garden enclosed by iron railings having spearhead uprights and
standards. The gate piers, with the bases of Dolphin lamp
posts, are separately listed (qv).
HISTORICAL NOTE: built for William Thorne, but sold to the
Barnstaple Bridge Trust in 1876. They in turn sold it to Mr WF
Rock, who founded the North Devon Athenaeum and Free Library
here in 1888.
(White W: Directory of Devonshire: 1890-: 133; Cruse JB: The
Long Bridge of Barnstaple: 1982-: 16).