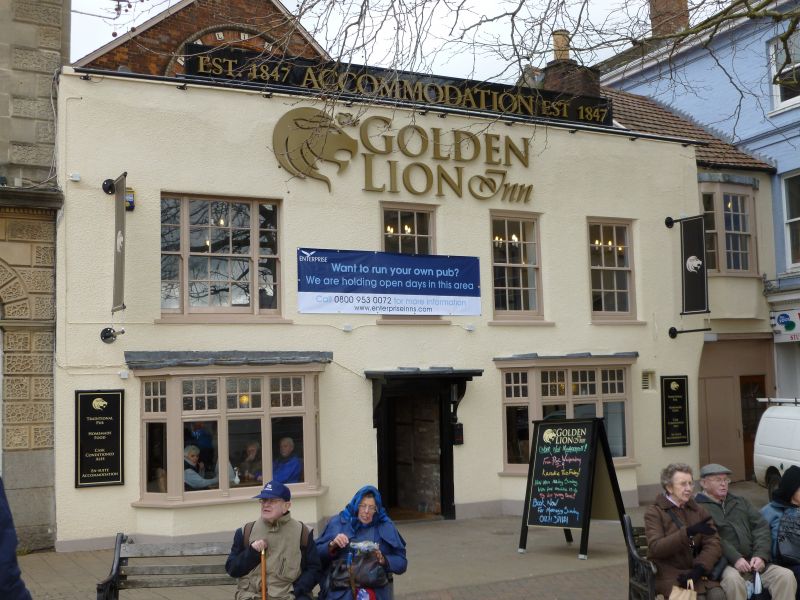 Inn, now public house and restaurant. Early/mid C17 building
remodelled and enlarged in early/mid C18 and later; interior
seems to include some imitation C17 work.
Solid rendered front with red brick gable set well back. Rear
wall of front block is of painted stone rubble; front wall of
back block is of painted brick with patches of stone rubble.
Added rear range to right is of red brick. Front block now
appears to have flat roof; back block has steeply-pitched
slated roof at right-angles to The Square. Parallel to it on
right is the tiled roof of the added range; in front of latter
the room over carriage-entrance is similarly tiled. Red brick
chimneys.
PLAN: front block has central through-passage with a room at
either side; small projecting stair turret at rear of
right-hand room. Behind this is a small courtyard (now glazed
over) with a one-room-deep back block behind. Linking the 2
blocks on the left side of the courtyard is a gallery in the
Devon urban tradition, although it is wide enough to qualify
as a small room. There seems to have been a second courtyard
behind the back block. To right of the building is a covered
former carriage entrance with arcaded openings at either side;
at the rear this appears to run under the added brick range
roofed at right-angles to The Square.
EXTERIOR: 2 storeys, possibly with a 3rd storey over the back
block. Front 4-window range with a 5th window to right, set
back over the carriage entrance. Centre doorway with moulded
architrave and flat moulded hood on shaped brackets;
3-panelled door, the large single panel at the bottom flush.
At either side a flat-roofed canted bay window of 5 lights;
plain wood-framed lower lights with 6-paned sashes (all with
horns) in recessed box-frames; the larger left-hand window has
2-paned side-lights. Front finished with parapet having a
plain coping, probably of concrete.
Carriage-arch to right has plank door in a plain wood frame.
Above it is a 3-light bow window with top entablature; sash
windows with 6-panes in centre light, 2 panes in side lights.
Gable of back block, clearly visible from opposite side of The
Square, has tall round-arched window (now partly infilled)
with BILLIARD inscribed in black and white lettering on the
arch. Added rear range (visible from Diamond Street) has
round-arched windows with what appear to be later mullioned
and transomed wood casements.
INTERIOR: rear of through-passage has mutilated early/mid C17
wood door-frame; square head, ovolo and hollow mouldings,
large urn stops. Inside it a C18 round wooden arch with
panelled spandrels. Room to right has old, plain ceiling
beams, room to left has moulded plaster cornices round most of
walls and ceiling beam. Right-hand upper-storey room has gable
fireplace with C18/C19 moulded wood architrave; round-arched
cast-iron basket grate. In rear wall, round-arched upper
storey window with 4-paned sashes.
Back block has at left-hand end of front wall one light of a
C16/C17 wood-mullioned window with flat-splay mullions and
wood glazing bar. Right-hand ground storey gable wall has
fireplace with chamfered wood lintel. Carriage entrance to
right has 3 large round arches with plain imposts to left
(that in middle apparently a dummy backing on to back block);
one to right, with the surviving impost of another. Room in
added range above has large fireplace with wooden architrave,
probably C18.