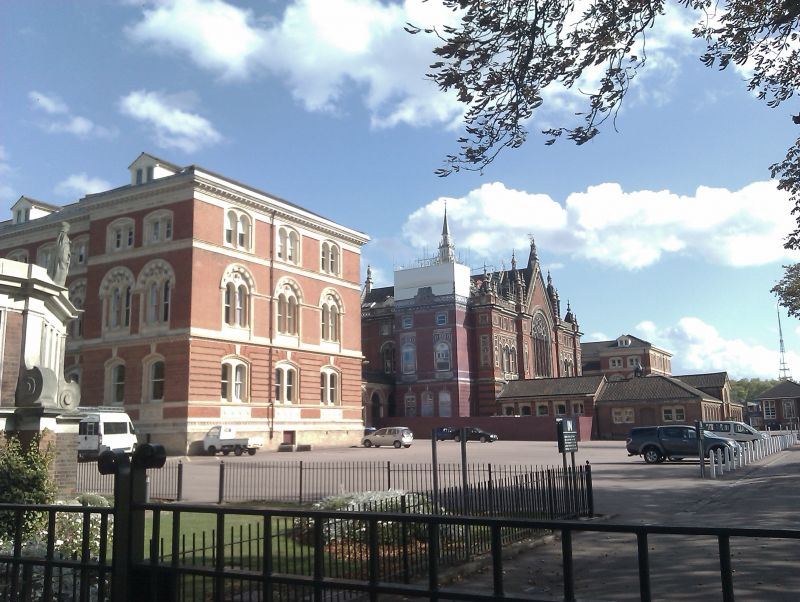 School. 1866-70. By the younger Charles Barry. Red brick and
cream terracotta, with tiled roofs.
STYLE AND PLAN: 3 blocks lined by arcades in ornate North
Italian Renaissance style. The larger central block is nearly
square, and contains the hall and other principal rooms.
The side blocks are in a more clearly Italian Renaissance
style. Each is 3 storeys, 5 bays on a stubby H-plan, with
hipped roofs above cornice and frieze. At the junction with
the arcades are towers: that on south block with an open,
arcaded top storey and pyramidal roof; that on the north with
a spirelet over a clock. Otherwise blocks are similar. They
contain classrooms and offices.
EXTERIOR: central block: 3 storeys richly embellished with
terracotta. The entrance facade is divided into 3 parts by
heavy pilasters which contain niches with busts and other
decorative panels; pilasters also clasp the corners. They rise
to a deep cornice above which is an openwork parapet which
continues over the tall central gable. Elaborate pedimented
doorway beneath large hall window with free Perpendicular
geometrical-type tracery but with a round head.
As the hall runs across the block, there is a similar gable at
the rear (the west side) but here the facade is obscured by a
lower forebuilding recently extended in a compatible style.
Ground-floor segmental-headed sash windows with keystones.
Piano nobile with round-headed sash windows surmounted, all
round the building, by busts of worthies from the World of
Learning. Small square sash windows to 2nd floor. Cream
plinth, sill bands and other decorative panels. Various
pinnacles, small, and larger central lantern with spirelet to
roofline.
Arcades are round-headed, of 9 bays, and issue slightly offset
from the centre of each side. They have now been glazed but
were originally open.
Side blocks: 3 storeys, 5 bays; banded rustication to
ground-floor with central doorpiece between keystoned
segmental-headed sash windows. Taller paired round-headed
sashes to piano nobile beneath large round arches and with a
small bust above each pair. Small paired segmental-headed
sashes to 2nd floor within segmental-headed surrounds.
Decorative cream plinth, sill bands and panels.

INTERIOR: central block contains Lower Hall, forming an
undercroft to the Hall, which is pillared in an orthodox
Classical style with pilasters to the walls and a rich
coffered ceiling. Beyond this is the recent Wodehouse Library.
To either side are dogleg stairs of stone with ornamental
cast-iron balustrades under deep, ribbed coved ceilings.
The Master's Library, off the top landing of the north stair,
has 2 storeys of shelves and a ceiling of Tudor character
restored after war damage. The fireplace by Barry is
surmounted by a tall C17 wooden chimneypiece with coupled
Doric columns and crowning pediments framing 2 panels painted
with allegorical female figures of "Pietas" and "Liberalitas",
said to have been acquired by Alleyn and to have come from
Queen Elizabeth's state barge.
The Hall has a hammer-beam roof with 2 tiers of arched braces
and 5 curved barrel vaults, producing a scalloped section. The
lower braces descend to fully-modelled wall shafts. The roof
is intricately moulded and painted. The Board Room also said
to be of interest.
These buildings represent one of the most important rebuilding
programmes of the period, with modern laboratories and a hall
finally liberated from teaching functions. Replacing the Old
College buildings further north on College Road (qv), they
were planned for 600 boys and the commission made financially
possible by a provision of 100,000 as compensation by the
railway lines which ran through the college estate.
Forms a group with Dulwich Old College (qv).