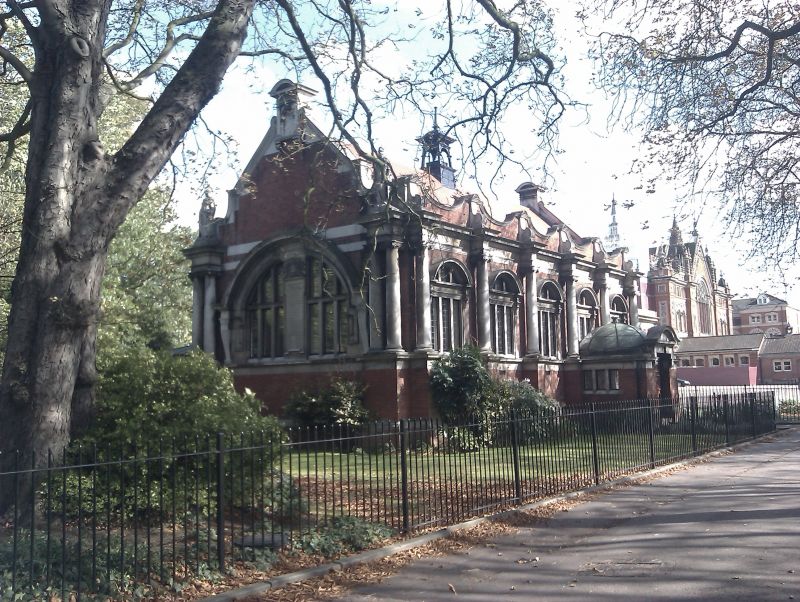 Memorial library, now meeting room and classrooms. 1902-3 and
1910. By Edwin T Hall as a memorial to those formerly of
Dulwich College (Old Alleynians) killed in the South African
War. Lower addition to rear of 1910 by E Stanley Hall in
tribute to Canon James Carver, first head of the school on its
refoundation. Lower rectangular block to rear with narrow link
the gift of the banker Henry Yates Thompson.
MATERIALS: red brick with Portland stone dressings and
copings, slate roofs save for copper dome over rotunda at
southern end of rectangular double-height main library.
EXTERIOR: the library is a 5-bay composition with Ionic
columns standing proud over attached buttressing plinths and
supporting a heavy cornice, volute brackets and scalloped
parapet. These curves are contrasted with round-arched
mullioned windows each with a heavy transom along the line of
the thick cornice of the 5-bay rotunda projecting to the
south.
Stone dado carrying through prominent buttresses with volute
stops and deep stone base emphasise the continuity of the
composition through the two elements of the building. The
glazing has been replaced but retains the historic leading.
Entrance in 4th bay from north of main range, with double
doors under segmental pediment rising behind to a shallow
dome. Iron bootscraper a part of the original work.
Stacks at either end of the main ridge disguised behind
aediculed and pedimented niches. Timber cupola in centre and
over copper dome. Figure of Justice over buttress of rotunda
by HC Fehr, presumably in commemoration of the British
victory. Memorial at northern end to the nine Old Alleynians
killed in 1899-1902.
The Carver Room has stone pedimented ends with triglyph frieze
over Roman Doric columns flanking tripartite windows.
INTERIOR: the library retains its barrel vault, oak panelling
and chimneypieces with massive volute brackets and modillion
mouldings under projecting flues topped with the school crest.
The interior of Carver Room is square, with a box cornice and
shallow saucer dome over fitted cupboards and panelling.
(Piggot JR: Dulwich College).