Celestial Church of Christ and Attached Wall and Railings 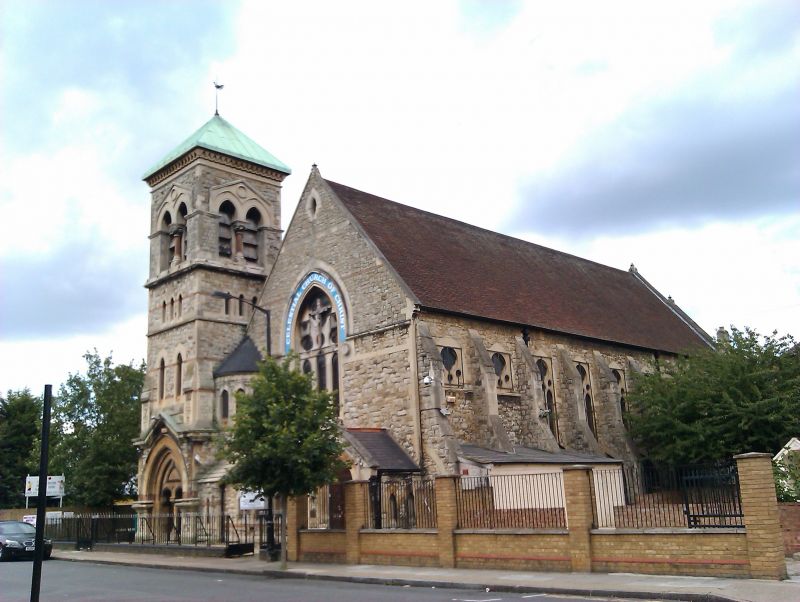 Formerly known as: Church of St Andrew.
Anglican church, now serving the Celestial Church of Christ.
1864-65. By E Bassett Keeling.
STYLE: High Victorian Gothic style of the wilful and muscular
kind associated with Keeling's work; plate tracery throughout.
MATERIALS: ragstone with dressed stone; nave roof of tile,
lean-to roofs of slate and tower roof of metal.
PLAN: single-bay apse, choir; heating chamber to south and
vestry to the north; north transept and aisle; suppressed
south transept; nave of 4 bays; narthex and north-west tower
of 4 stages with pyramidal roof.
EXTERIOR: apse lit by 5 trefoiled lancets with red sandstone
springing band; north side of choir lit by 4 quatrefoil lights
set in pointed arch surrounds; north transept lit by wheel
window with a pair of 2-light windows below; north aisle lit
by continuous arcade of lancet lights, and the clerestory lit
by paired lancets.
The west and south elevations of greatest interest. The former
with boldly scaled west window and an entrance flanking west
porch, that to the south simply gabled, that to the north
being the main entrance and forming the base of the tower;
gabled aedicule to west and return, sub-ordered.
Tower: each face of 2nd stage lit by a pair of lancets, and of
3rd stage by triplets; top, or bell stage, patterned on
Italian medieval examples and recalling the top storey of GE
Street's St James the Less, Thorndike Street of some 15 years
earlier: large, paired lancets sharing a single column, set in
gabled aedicule which is set flush into the wall surface.
Large scale corbel table.
Ritual south elevation articulated by buttresses, widely
spaced at west end to mark gallery inside, and narrowly spaced
to 4 nave bays; each buttress of 2 setbacks, the lowest stage
becomes flying buttress to form an alleyway to the vestry.
INTERIOR: the ambitious scheme for decorative carving never
completed; there remain, however, some excellent pieces
ranging in date from 1864 to the early C20. Historiated
capitals to 3-bay blind arcade in south side of choir. Corbel
shafts to chancel arch carved as singing angels. Chancel arch
with inscription in Gothic script: 'The Lord in His Holy

Temple, Let All the Earth Keep Silent before Him.' Roof of
choir and apse with wood ribs, boarded.
Nave ceiling with drop acoustic tile since 1978; above are
original arched braces and boarded ceiling, one bay of which
exposed near chancel arch. Arch into north transept and into
suppressed south transept, here of 2 blind bays.
West gallery to nave, supported on Gothic cast-iron columns
and having jigsaw cut gallery front in stylised floral
pattern. Shafts to north aisle and transept of polished pink
and grey granite.
The planning is very Low in feeling, with an exceptionally
broad nave and north aisle entered from the transept by a pair
of stilted, pointed, segmental arches of different heights, a
noteworthy feature. South wall of nave has band of billet
moulding found throughout the design, and the windows are set
well back from the wall plane.
Of special interest are several carvings, including: at
crossing, NW pier, a double capital showing fishermen; 2nd
capital from crossing shows Christ surrounded by children and
the 3rd Christ preaching; the rest are carved with heavy
floral figures. Carvings dated 1872, 1876 and 1884
respectively.
MEMORIALS: plaque on south wall of choir memorial to the Revd
William Pheasant, MA, vicar, 1899-1916, who installed electric
lights. Plaque in eastmost wall of nave, south side, dated
1884; it identifies 2 adjacent pillars as a memorial to Revd
William Briggs carved by the parishioners themselves.
Original furnishings removed when Anglican communion
deconsecrated the structure and sold it to the Nigerian
Celestial Church of Christ.
SUBSIDIARY FEATURES: attached cast-iron railings on low wall.