Tower and Portal of Church of St Mary, Newington 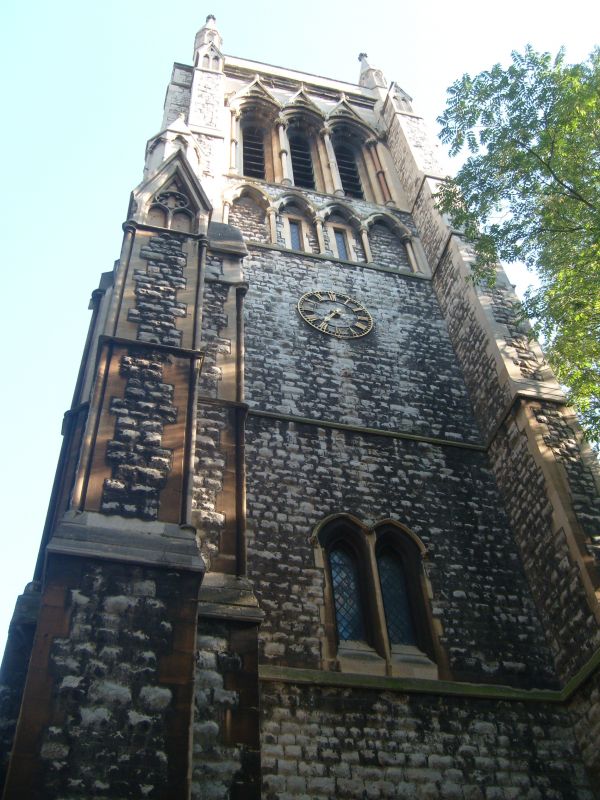 A church tower and portal, of 1876 in Early English style by James Fowler of Louth. The remainder of the church was demolished following an air raid in 1941.

A church tower and portal, of 1876 in Early English style by James Fowler of Louth. The remainder of the church was demolished following an air raid in 1941.

PLAN: a square on plan four-stage tower with an attached single-storey portal wall to the north-east.

EXTERIOR: the tapering tower has corner buttresses and octagonal pinnacles with conical roofs to the parapet. The bell stage has wooden louvres within triple arches; the third stage has trefoil arches and colonnettes and a clock face on the north-east side; the second stage has an arched window with colonnette and the lowest stage has an arched doorcase with wooden double doors. The south-east side has cement rendering to the two lower stages, a large arched opening and a smaller Caernarvon-arched doorway.

The portal wall retains an elaborately moulded arched doorway. The outer portion of this has a pointed arch supported by piers with two attached columns to either side, and the inner part has a semicircular cusped arch carried by piers with one attached column each. The tympanum under the arch has a sculpted figure of Christ in Majesty framed by a mandorla with demi figures of angels and banners on each side.

The tower and attached portal are the remaining part of the 1876 Church of St Mary, Newington, built to the designs of James Fowler of Louth which was hit by a bomb during an air raid on 10 May 1941.

A replacement church was designed and built in 1957-1958 by the architect Arthur Llewellyn Smith immediately to the south-east but is not attached to this structure.

The tower and portal to the Church of St Mary in Newington, of 1876, designed by James Fowler of Louth, is listed at Grade II for the following principal reasons:

* as the surviving element of the former Church of St Mary, destroyed in 1941 by enemy bombs.

* proximal and functional group value with the rebuilt Church of St Mary of 1957-1958 to the designs of Sir Arthur Llewellyn Smith.