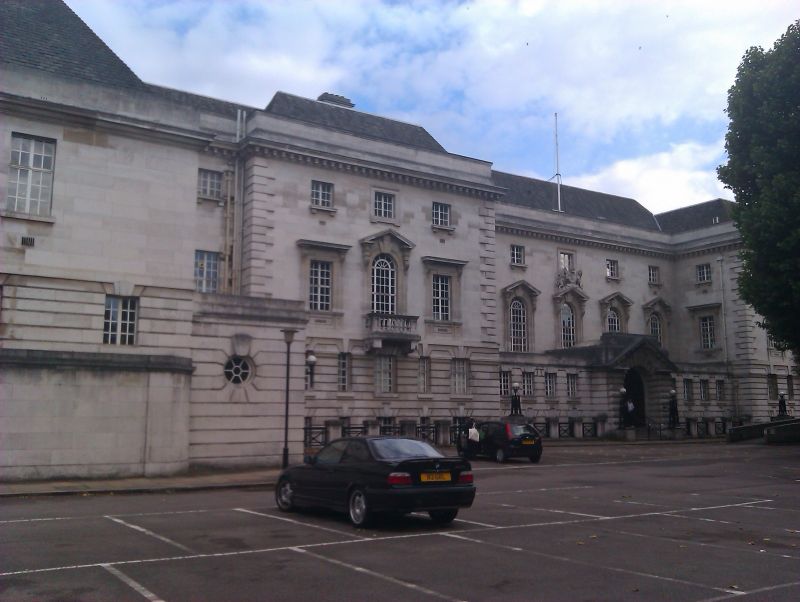 County of London Sessions Court. 1914-1921, extended 1954-58.
By WE Riley, LCC chief architect. Extension to south-east by
Hugh Bennett and Edward Sheppard, also for the LCC. The 1974
block to the east by Bennett is not of special architectural
interest.
MATERIALS: brick structure faced with Portland stone and
roofed with grey Westmorland slate. 1950s extension of brick
and reinforced concrete.
PLAN: main entrance elevation presents a shallow U-shaped
plan.
U-shaped plan to the left return.
EXTERIOR: rusticated ground floor, 1st floor treated as a
'piano nobile', the windows set under cornices or segmental
pediments. Second floor treated as attic.
Main entrance elevation; the corners articulated by quoins and
the forecourt filled in at ground-floor level by a rusticated
range of authentic design, at the very centre of which a
round-arched and heavily keyed entrance under a broad
pediment.
On left return the design is less ornamented but still the
grand civic manner found on the main elevation; at the centre
a trio of windows under cornices and pediment as on the main
elevation. Rusticated ground floor repeated.
INTERIOR: many grand interiors of authentic design, including
public hall at the main entrance, which is a double-height
rectangular hall with segmental barrel-vaulted roof and wall
piers; wood gallery to 1st-floor stairs. Courts 1 and 2 on a
square plan with Diocletian windows and domes to the rear, on
either side of centre axis. Committee rooms and offices, many
of which have handsome wood panelling; corridors with
segmental barrel-vaults and other original decorative
finishes. Of special interest is the early C17 chimneypiece in
the Justice's Room.
The new courtrooms, Nos 3 and 4, panelled in light coloured
oak with red leather seat coverings; geometric canopy above
judge's throne; many authentic features and finishes intact.
The hall between the 2 courtrooms also intact, its floor a
lively abstract pattern; this room also contains a dramatic
steel and timber 'helicoidal' staircase that gives access to
the consulting rooms on the 1st floor.

The exterior bears carved panels executed by R Bentley
Claughton in 1956, next to the JP's entrance in Harper Road,
where they had their own car park and walled garden. Claughton
also carved the Coat of Arms in the main block of the Sessions
House.
HISTORICAL NOTE: a court stood on this site since 1791, when
the Surrey County Sessions House designed by George Gwilt the
Elder was erected. Later additions of 1853 and 1870-80.
Following the Local Government Act of 1888, the connection
between the Newington Sessions House and the County of Surrey
was broken. After meetings in both Newington and Clerkenwell,
the LCC decided to build a special structure on the Newington
site.
Originally the main block flanked by 2 wings formed an
architectural approach from the Causeway. Demolished in c1923
to make way for ventilation shaft for the Northern Line. The
centre block remains as Riley designed except that the
courtroom in the centre used for civil proceedings was cleared
to make access for the new courts in 1958. One of his last
works for the Council. After bomb damage of 1941, an extension
comprising 2 new courtrooms was planned.
(The Architect's Journal: Mason P: Historical Note on the
Inner London Sessions Court: 1921-; The Municipal Journal, 4
March 1955; The Builder, 1914 (1); The Builder, 12 September
1958).