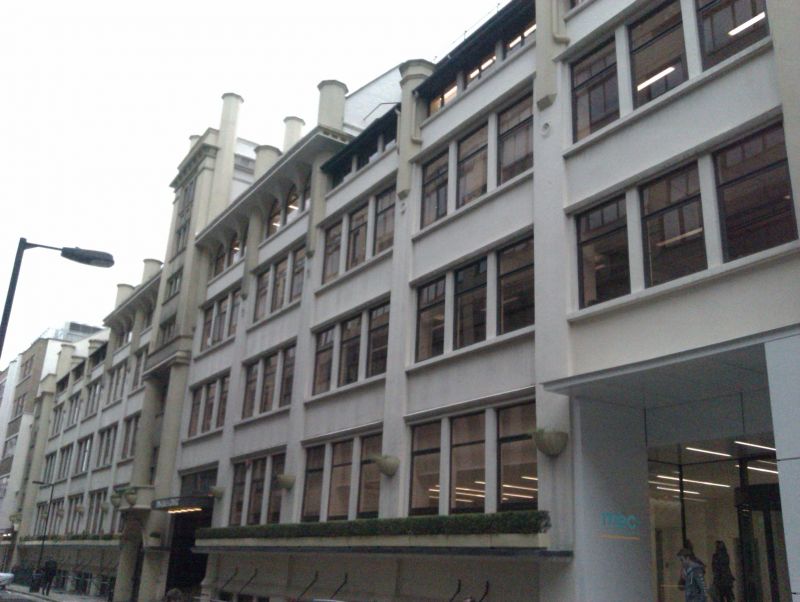 EXTERIOR: five storeys over basement, the top floor set back. Originally of 13 bays, symmetrically arranged about an entrance range, with an additional goods bay to the south. The central tower which rises to six storeys, projects slightly from the rest of the elevation, as do the bays, formerly capped by low domes, at either end.

The divisions of the building are marked by piers, each with an octagonal chimney or vent breaking the skyline, and a protruding iron ring at the second floor level. At third floor level, the five bays between the central tower and the end bays are treated as a glazed loggia of which the deep coved cornice of the two bays to either side of the tower shelters the only group of round-arched windows. On the lower three floors, each bay contains a tripartite rectangular window with a flat metal frame. The last bay to the south also has tripartite windows at second- and third-floor levels, but the ground floor has a wide goods entrance surmounted, at the first floor level, by a large semicircular window with four vertical divisions. Entrance aedicule to centre range has primitive attached columns.

The style is eclectic, with references both to Chicago School commercial design, and the work of W.R Lethaby; a hint of Tudor detailing intermingled with the Arts and Crafts touches. An early example of the Kahn system of reinforced concrete construction, invented in the United States and introduced to Britain in the Edwardian period. The Kahn system is second in importance only to the Hennebique concrete reinforcement system, which was first used in this country at the end of the 1890s. Quite apart from this technical interest, the structure has considerable architectural merit; the designer has endowed a straightforward and utilitarian pier and spandrel system with grandeur and powerful scale.