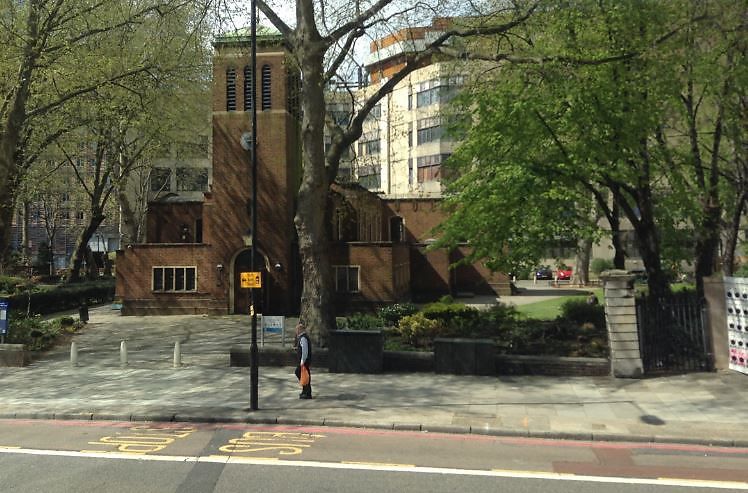 Christ Church was built in 1958-9, to the designs of R Paxton Watson. It contains contemporary stained glass by Frederick W Cole and later work by others, it is listed principally for its stained glass.

EXTERIOR: Christ Church is a stripped neo-Georgian church with a concrete frame, clad in brown brick with stone dressings, and has a barrel-vaulted, copper-clad roof. The building takes the form of a rectangular box with a tower at its eastern end, low flat-roofed side aisle and ancillary rooms to north and south, and a church hall placed at a transverse angle to the west end, this with a single-storey kitchen block behind it. The tower is in three stages with a brick lower stage containing the main entrance, a slit window and a clock, a bell loft with louvres above. It has a copper-clad pyramidal roof. The main entrance is at the east end, facing Blackfriars Road, and is a semi-circular-headed opening with gauged brickwork and a stone keystone and varnished, hardwood door. The nave and sanctuary windows are segmental-headed; those to the aisles and ancillary rooms have two-, three- or four-light mullions. All the windows are leaded lights with metal glazing bars set in stone surrounds. The church hall is approximately the same size as the nave and is similarly styled, with a shallow barrel-vaulted roof. It is entered at its southern end, which features a stone statue of Christ in a niche, set in a brick relieving arch. Four stone medallions bearing the insignia of the evangelists are placed to either side of the statue, beneath which is the entrance with a stone canopy and varnished, hardwood doors.

INTERIOR: the nave has five bays and the sanctuary one. Four shallow steps running the full width of the nave begin half way along it and lead to the sanctuary. The second step is deeper than the others and forms a choir, furnished with timber choir stalls. There is a northern aisle, via which the church is entered, with dado panelling and in-built cupboards for hymn books. A small former chapel to the north of this aisle has now been enclosed and its fittings removed. At its west end, the nave is divided from the church hall by a glazed screen (a replacement of the original sliding doors) above which is the organ. The interior fittings and finishes of the church and hall are largely contemporary with the original build. They include two timber pulpits, a lectern, and an elegant, slender font, this with brass detailing. The altar furnishings and communion rail were a memorial gift to the parish in 1959. The pews are original and bear coats of arms on their ends. The floor is parquet.

The church also includes a number of fittings of more recent date including: the altar frontal made by local unemployed people in 1984; a mural behind the altar depicting Wall Street in New York, originally made for a National Theatre production; 'New Regime' of 1989 by Ian Walters (1930-2006), a sculpture commemorating the dispute between News International and print workers during the move of printing presses from Fleet Street to the Docklands in 1986-7, the latter located in the church hall. Walters' newspaper obituaries tell us he was a figurative sculptor whose portraits celebrated the heroes of the left, including Nelson Mandela (now on London's South Bank), Harold Wilson (in Huddersfield), and a sculpture of Sylvia Pankhurst which was still in maquette form at the time he died.

STAINED GLASS: the most distinctive feature of the interior is the series of ten stained-glass nave windows by F W Cole, at this time working for Wippell and Co. Installed shortly after the church opened in 1960, they depict people, both contemporary and historical, at work in local business and industry, and in local situations. A British Pathe newsreel of May 1961 describes the newly installed windows and gives their theme as 'Work and Worship'. Each window comprises two panels, the larger at the top portrait-orientated above a smaller panel in a landscape orientation, between which is a cartouche bearing emblems associated with each theme. The attention to detail is remarkable. In the window featuring the Routemaster, for example, the bus stop lists the numbers 4, 45 and 63 buses as stopping there; the latter two buses still stop outside the church. There is interest in the depiction of some of London's most famous historic places, including St Paul's Cathedral, Bankside Power Station (now Tate Modern) and the River Thames. Also significant is the depiction of local industry, of particular poignancy given that few such processes now take place in this area, which was once the principal place for factories and industrial works in the capital.

The subjects are as follows, with a) indicating the larger, upper panel and b) the lower panel.

North Side (west-east).
1. a) two charwomen in 1950s dress with mop and bucket, one looking out of a window towards St Paul's dome.
b) other women in 1950s dress in a London Transport bus stop queue and a Routemaster bus. The bus stop displays numbers 4, 45 and 63. The signature of K G Bunton features as lettering in the fascia of a shop, located to the left of the bus driver's cabin - Bunton was a staff artist for Wippell and Co at this time. The bus advertises Rice Crispies.

2. a) a baker in historical dress removing bread from a bread oven.
b) 1950s bakers at work with industrial-sized ovens, in a factory setting.

3. a) carpenters at work assembling a doorframe with a large seven-storey building under scaffolding in the background; the workers wear C20 clothes.
b) a 1950s building site showing labourers mixing cement and shovelling sand.

4. a) a woman in historical dress carrying a basket accompanied by a boy (with ball) and a girl (with doll), against a background showing the tower of Christ Church as it appeared in the C18 and the weather-boarded, tiled-roofed vernacular houses of old Southwark. The scene is taken from a print of c.1800.
b) a nine-storey housing block with a car and pedestrians in silhouette in the foreground; this is the north façade of the public housing block on the north side of nearby Nelson Square, built in 1958.

5. a) a suited utilities worker, with a panel of dials and three telephones against a background scene of electricity pylons leading across hills and woodland.
b) Bankside power station (now the Tate Modern) viewed from the south with St Paul's Cathedral beyond.

South Side (west-east).
6. a) a man and a women in 1950s dress in an office, with other clerical staff, a filing cabinet, a desk calendar, and a typewriter in the background.
b) an office scene, with clerical workers at desks with typewriters or telephones.

7. a) a waterman on the Thames with cranes and wharfs behind.
b) a panoramic view of the river Thames, showing St Paul's Cathedral and Blackfriars Bridge.

8. a) a printer in historical dress with his apprentice in front of a traditional printing press.
b) workers in a 1950s printing factory.

9. a) goods for brewing being weighed in scales.
b) brewers loading ingredients into a mash tub and a copper.

10. a) a supervisor holding a plan and callipers oversees a worker at a milling machine, representing engineering.
b) two men manufacturing a crankshaft on a lathe.

The two sanctuary windows are also by Cole - these are signed and dated 1960, and depict the sacraments of Baptism and the Eucharist.

The windows in the north side aisle and the foyer are by John Lawson and depict the local companies and organisations that sponsored their creation in 1984.

HALL: the church hall has a parquet floor, dado-panelling, its original doors, and a modern suspended ceiling. A gallery at the southern end has been enclosed but its raked flooring and the gallery stair, with a solid timber balustrade, survive. There was originally a stage at its north end but this has been removed and a floor inserted into the space to create two floors of offices.

Christ Church, Blackfriars Road, replaced a Georgian church of the same name, dating to 1738-41, which had suffered bomb damage in 1941. This building had itself replaced the first church on this site, built in 1671 with a bequest in the will of one John Marshall (d.1631) on land donated by a William Angel. Both earlier churches were approached principally from the north, via Bennett Street (now Rennie Street), and entered via a western tower. When the church was rebuilt, a tower was placed to the east end, presumably to form a landmark on Blackfriars Road, the major thoroughfare. Fragments of the older church were salvaged for the new building, namely a stone niche with a statue of Christ and four carved stone medallions symbolizing the Evangelists. These now feature on the church hall's southern façade, but are described in the Survey of London volume for the area (published in 1950, at which time the church was a bomb-damaged shell) as forming part of a Romanesque square-ended chancel added to the Georgian church by C R Baker King in 1890.

The Dedication Stone in the front porch records the church's history and the opening of the building as an Industrial Mission Centre by the Duke of Edinburgh in 1960. Industrial Missions were established in the mid C20 to provide ministry to workplaces. This association between the church and the world of work has left a unique mark on the built fabric of Christ Church in the form of the stained glass windows which light the nave, depicting workers and industry in the local area, and a later series of windows (dating from 1984) representing local businesses and organisations.

The stained glass windows of the nave and sanctuary are contemporary with the church, installed shortly after it opened in 1960. They are the work of Frederick Walter Cole (1908-1998) for Wippell and Co. Cole became a glass-making apprentice with William Morris & Co (Westminster) in 1924, where he remained until the Second World War. After the war it was Cole who re-established the firm, where he remained as chief designer until it closed in 1958. Cole worked for a brief spell for Wippell and Co before establishing his own studio first in Fulham, and then in Canterbury, where he was heavily involved in the restoration of the medieval glass of Canterbury Cathedral.

The last churchyard burial at Christ Church was in 1856 and the churchyard was cleared in 1895 when the interments were removed to Brookwood Cemetery in Surrey. In 1900, the churchyard opened as a public garden and in 2000 it was restored; both events are commemorated in stone plaques on the churchyard walls.

Christ Church, Blackfriars Road, is designated at Grade II for the following principal reasons:
* Decoration and craftsmanship: the church contains a series of stained glass windows which combine artistic merit and craftsmanship of the highest order, with remarkable attention to detail;
* Historic interest: the windows are an early example of stained glass which responds imaginatively to a very specific place, depicting some of London's most famous buildings and conveying a particular iconographical message about celebrating ordinary lives;
* Architectural interest: the simple neo-Georgian building provides an appropriate, contemporary setting for the stained glass;
* Intactness: the church is very well preserved, with its leaded windows and internal fixtures and fittings intact.