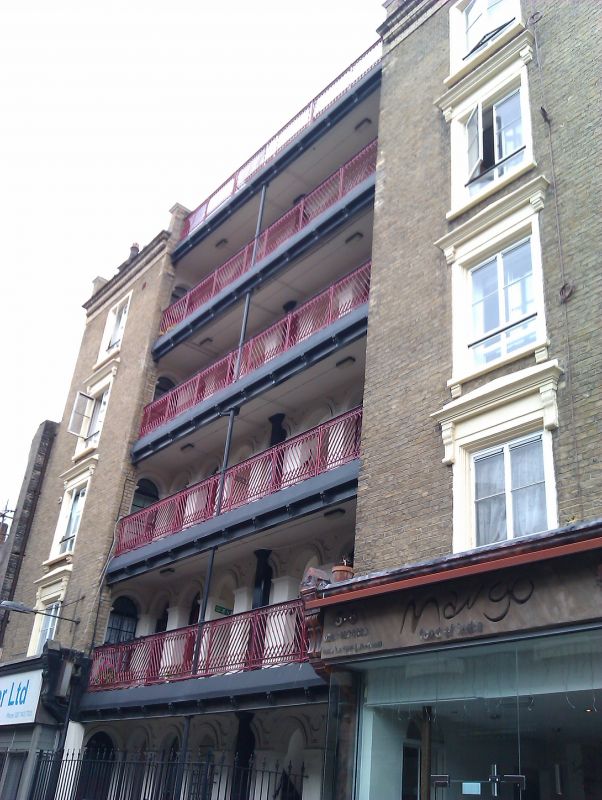 Flatted philanthropic housing and integral shops. 1864. By
Sydney Waterlow, with Matthew Allen, builder. For Waterlow's
Improved Industrial Dwellings Company. Brick in Flemish bond,
painted stucco or cement facing, and cast concrete details;
roof parapeted.
5 storeys. End blocks of one window each, stretching between a
recessed open-stair, balcony range. Flats entered via the
balconies. Walls to balconies are rendered, painted, and
treated as blind, round-arched arcading pierced by windows and
doors. Rubbish chute in centre. Railings to area and
balconies. Shop to ground floor of each end range, with
bracket fascia of original design.
INTERIOR: not inspected.
HISTORICAL NOTE: Sydney Waterlow's IIDC was one of the most
successful of Victorian providers of low-cost rented
accommodation which was also commercial. Founded in 1863, its
early buildings are among the most distinctive examples of
model dwellings in London. The stairwell and railed balcony
arrangement (with the balcony treated as blind arcading) was
characteristic of IIDC blocks and was designed to improve
ventilation, sanitation and safety. Their history and that of
the philanthropic housing movement is told in 2 books by John
Tarn, 'Working Class Housing in 19th Century Britain' and
'Five per Cent Philanthropy'.
(Tarn J: Working Class Housing in 19th Century Britain: 1971-;
Tarn J: Five Per Cent Philanthropy: 1973-).