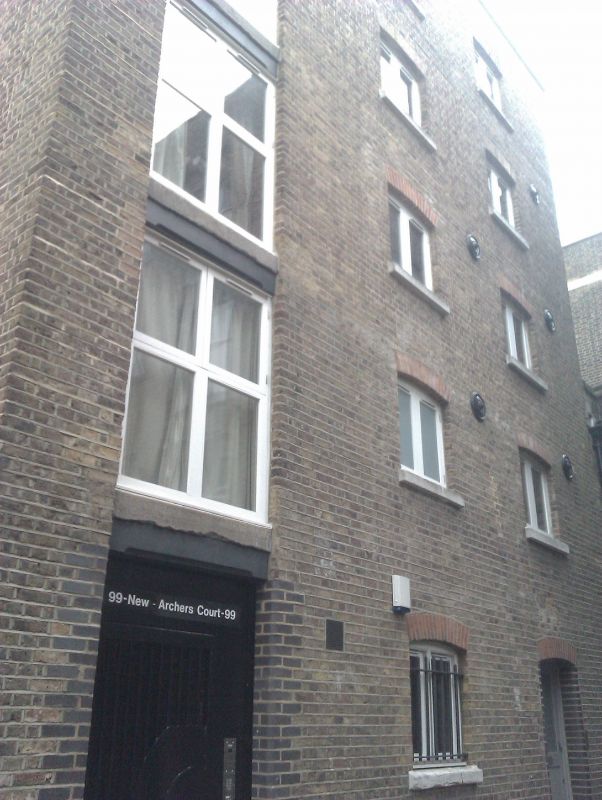 Granary warehouse, now used as studios and workshops. c1843. Refurbished in 1970s. Stock brick to street elevation but side elevation mainly of brown brick with red brick dressings and Portland stone coping and other details; hipped slate roof behind parapet.
EXTERIOR: Street front of 5 storeys, 3 bays, full-height loading bay to left, protected by flat cast iron cornice hood on large, pierced console brackets. Windows are small and square with cambered red brick arches and Portland sills, the wooden two-light casements later C20 replacements. Plain parapet has ends slightly carried out on Portland stone corbels.
Similar river front with hoist to right, the hood removed from the console brackets. West return elevation of 5 bays with similar fenestration. All elevations have circular cast iron ties.
INTERIOR: Internal construction is of Baltic timber, supported on stone corbels except for street front which is supported on cast iron, and supported on cast-iron cruciform columns. Most columns have jowled heads apart from simpler cruciform columns to the ground floor and there are two shorter cruciform columns to the ground floor similar to other floors. The floor joist to the fifth floor has a merchant's mark probably added in the Baltic before
shipping abroad. Old floor boards with openings. The fifth floor retains an original wooden shutter with hinges and iron bar. Intact roof structure of thin scantling with angled struts with metal hangars and clamps, ridgepiece and wooden dragon posts, in one case with
wooden box gutter. Later C20 staircases but the balustrading to the western one is made up of five wooden hatch bars with iron fittings and hinges from Thames lighters which prevented cargoes being stolen. Later C20 partitions.
HISTORY: Building of the correct shape first shown on 1843 Rating Plan. On Loveday's Waterside Survey of 1857 it is shown as a granary of five floors occupied by W W Landell. Uneven floors probably caused by the weight of the grain. At time of survey the last riverside warehouse in the London Borough of Southwark still in active industrial use. Part of one of the best remaining group of warehouses on the Thames, rising sheer from the quay and clustering about St Mary Rotherhithe (qv), St Marychurch Street. This one terminates the group to the west.