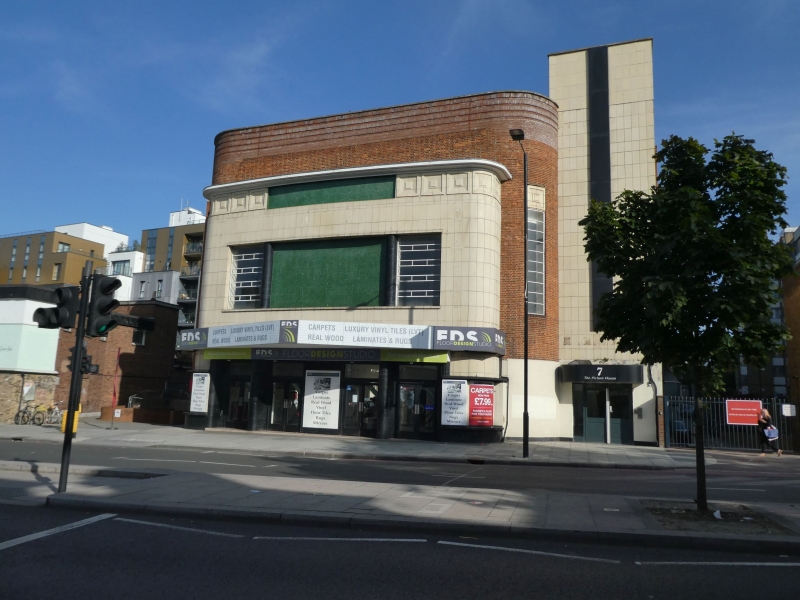 Steel frame clad in brick with some decorative faience tiling to front. Auditorium with small stage behind proscenium arch, and single balcony reached from large foyer to front; the auditorium sub-divided into three in 1977. Curved brick facade with projecting curved faience centrepiece, a rare instance of the display board for the films being incorporated within the design and originally with name 'REGAL' over, set within a fine surviving frieze of square motifs. Brick banded cornice to high parapet above. To right a short staircase tower forms a careful counterpoise to this double-curved composition. In brickwork, staircase windows set on curve, with horizontal metal panes and faience motif at top. The outer doors have been renewed, and the canopy raised, in keeping with the overall design. Modern signage in 1950s spirit. The other elevations of unadorned but well-made brown brick, with windows to rear offices and dressing rooms with rectangular-paned metal windows. Rear has boiler chimney but no fly tower.

INTERIOR. The foyer is a particularly handsome design, unrivalled in ABC cinemas and rare in the work of all cinema architects by this date. Double-height, with dog-leg stairs to either side leading through arch of eliptical columns to landing and upper foyer, the balustrade with art deco metalwork, as have the radiator guards. Stepped ceiling with cornice and frieze. Coving in ceiling and over original inner doors on landing, that underneath balcony of similar pattern but incorporating planters. Original inner doors at ground-floor level also. On landing two classically-inspired roundels, and an original bevelled mirror. Inner vestibules with decorated ceilings. The former balcony is now the principal screen, with a modern inserted proscenium arch; it retains decorative ironwork balustrading at entrance, fluted pilasters with niches in side walls, a fluted cornice, and grillework and coved insets to the ceiling. Similar details to the ceilings of Screens 2 and 3. However, the original proscenium survives in a dark void behind these screens, with stencil decoration over, and plaster grilles to either side, now blocked. The fluted proscenium surrounds and cornicing make a convincing composition.

The ABC circuit was the most extensive in Britain in the 1930s, but few examples survive in anything approaching listable condition. This is a particularly striking survival for the quality of its facade, and especially of its double-height foyer which survives almost unaltered.