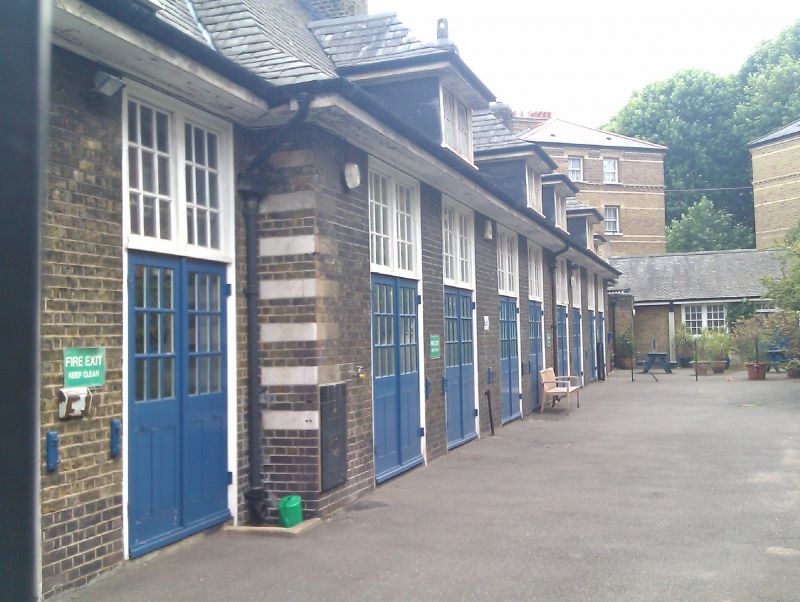 GV II
Special school, 1916, for the London County Council, now the Centre for Literacy in Primary Education. Situated at the north east end of Webber Row, on the corner with Webber Street.

EXTERIOR: The stock brick building is in the Arts and Crafts style and has steeply-pitched hipped roofs with flared eaves marking the three long blocks lying adjacent to each other which form a roughly rectangular plan. To the south is the principal row of classrooms, with six hipped dormer windows to the roof. This elevation, the most attractive in the building, is symmetrically arranged; the sections at either end have two pairs of glazed doors below, while the central range of this block steps forward slightly and has eight pairs of glazed doors below. There are pivotal windows above the glazed doors and the glazing of all these openings is original. The central section of the south elevation is defined by four chimney stacks, and there are also stacks at either end.

The second component is the hall, the roof of which has large semi-circular windows in each gable end, two ridge lights and three clerestories to each pitch. The ridge lights are visible over the entrance façade, the third section of the plan, which has double doors with a shaped gable and projecting hood, breaking through the eaves of the roof. Most of the symmetrically placed fenestration retains its original glazing. The Webber Row elevation is formed by the return wall of the south range, together with a small block with a hipped roof which hides the central range standing behind it. It contains a handsome hipped vent in the roof and a door with a large hood canopy.

INTERIOR: An east-west hall with a row of classrooms running along its south side and a block with entrance lobby, teacher's room and WCs running along the north side. Extending east from the hall is a corridor, with further classrooms to the south and small offices to the north, leading to a second, smaller hall space. There have been few alterations to the building: all the classrooms retain their fireplaces and chimney flues and the iron roof trusses and timber doors are in situ throughout the building. The most impressive space is the hall where the semi-circular gable end windows and ridge lights provide plenty of natural light. The interior as a whole is of considerable significance for the degree of survival of original features which is not common in buildings for educational use.

HISTORY: The Centre for Literacy in Primary Education (former London County Council special school) was purpose built to accommodate children with physical disabilities. It opened on 11 September 1916, as recorded in the minutes of the London County Council. The site had been in the ownership of the LCC for some years and was originally intended for a lodging house for women and a sixth housing block, to accompany the five that were built and survive today. In the London Directory of 1921 the school is described as 'London County Council School (Physically Defectives)'. Since 1890, the London School Board provided purpose built accommodation for children with special needs and this LCC school is a successor to those earlier special schools of the late C19.

There are very few listed special schools in London: the earliest period of their development is represented on the list by the Girls' Special School annexe to Hugh Myddelton School, built in 1902 as an addition to the Board School of 1892 (Grade II); the innovative techniques of the 1920s are evidenced in the Aspen Open Air School in Lambeth which had classrooms built open to the elements (Grade II); the post-war exemplar is the Phoenix School, Bow Road, of 1951-52 (Grade II*).

SUMMARY OF IMPORTANCE: The school is a carefully-designed and subtle building of special architectural interest. The Arts and Crafts style exterior - with its large chimneys, low-hanging eaves and large dormer windows - is well-executed in good quality materials. The elevation to the south is particularly handsome with its parade of double doors, windows and dormers. Built to serve children with physical disabilities, the school was clearly planned with their welfare in mind. While many special schools were built in the period after 1890, Webber Street/Webber Row school is remarkable for its intactness, in plan and in features such as windows, doors and fireplaces, which is unusual for a building in educational use. A further point of interest is the school's strong contextual interest in this enclave of late C19 and early C20 social welfare buildings: the low-level domestic manner of the school provides an attractive contrast with the tall housing blocks with which the school has group value; to the east is the Peabody Estate of 1871 (listed Grade II) and to the south the five London County Council blocks of 1905-06 (also Grade II).