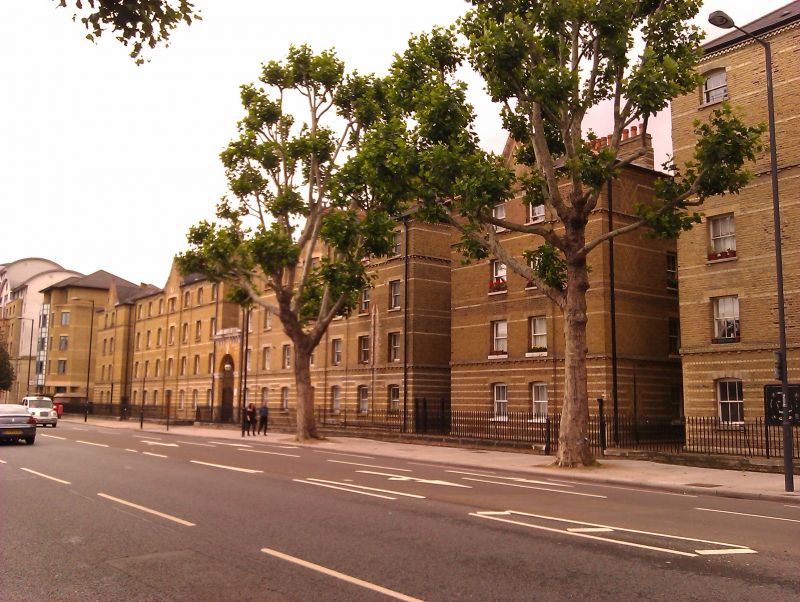 Philanthropic housing. Completed in 1871. By Henry Darbishire.
For the Peabody Trust. Yellow and white brick with stucco
dressings.
PLAN: a square and a rectangular courtyard linked at the
corner to form an axis running from south-west to north-west.
Comprised of 16 more or less identical blocks, each
rectangular in plan and 4 storeys. The shallow pitched roofs
slated. These remain largely as built but soon after
completion of the group a 5-storey block of similar design and
plan was built to fill the central space between the 2 blocks
on the south west side of the southern courtyard, and 2
further 5-storey blocks were added to the north on Blackfriars
Road.
EXTERIOR: all the 4-storey blocks follow a similar pattern in
their elevations.
To the courtyards: 7-window range with windows having 6x6
sashes with segmental and flat arches. Elevations away from
courtyards are slightly different, having 6-window ranges and
a central recess for communal stair and WCs. Some returns have
2-window ranges, but this arrangement varies depending on the
position of the block.
The elevation of the 4 original blocks facing Blackfriars Road
are different to the others in having steep broken gables and
more elaborately patterned brickwork. Entrance to Peabody
Square is gained by a large classical archway with a boldly
projecting bracketed cornice and banded rustication The
staircase recesses on these elevations have been altered and
now contain C20 doors at ground level and casement windows on
the upper floors. A number of staircase recesses of the other
blocks have also been filled in but those of the south-eastern
range of the southern courtyard remain as built.
INTERIOR: not inspected.
HISTORICAL NOTE: originally named Peabody Square, Peabody
Estate is an important monument in the history of
philanthropic flatted housing. The reduced scale of the blocks
(relative to what had come before), their internal
organisation (access by means of an enclosed stair rather than
an external one) and the spacious layout of the whole which
was centred on 2 planted squares, all influenced the planning
of subsequent artisans' dwellings.