Numbers 1 to 9 and Attached Area Railings 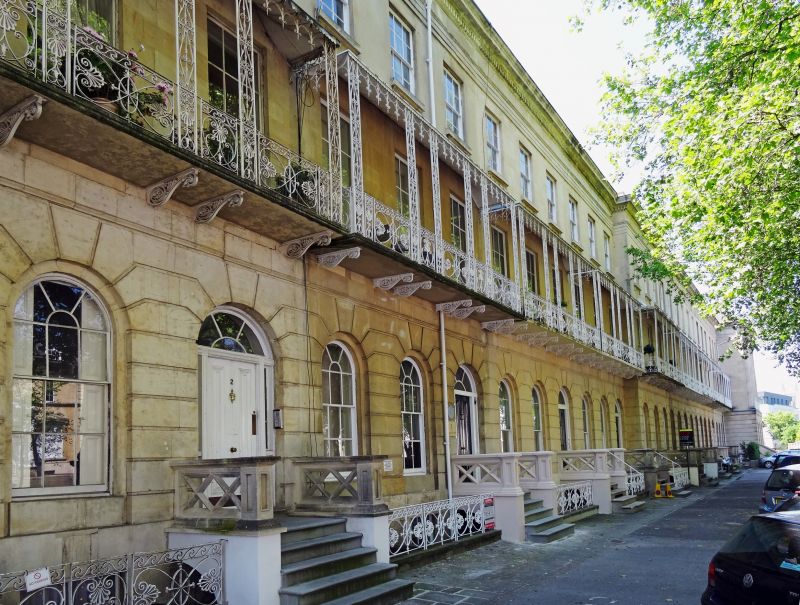 Terrace of 9 houses and attached railings. 1839-46. Builder:
William Swain. Ashlar over brick with concealed, double-pitch
roof and iron window guards, verandahs and railings. Double
depth plan with side stairhalls and service ranges to rear.
EXTERIOR: 3 storeys on basement, 3 first-floor windows each;
full-height. Left house (No.1) breaks forward and has four 3/4
Corinthian columns through first and second floors; further
breakforward at No.6. Crowning architrave, frieze and dentil
cornice. Horizontal rustication to ground floor drawn into
voussoirs over round-arched openings. 6/6 sashes where
original, taller to first floor, those to ground floor mainly
3/6 and 2/2 sashes with radial glazing to heads. Flights of 5
steps (roll-edged where original) to round-arched entrances,
2- and 4-long-fielded-panel doors with side-lights and
fanlights, some with radial glazing bars. Left return:
4-window range, mainly blind openings. Basement has 8/8 and
6/6 sashes. Rear retains many 6/6 and 8/8 sashes.
INTERIOR: retain original joinery including panelled reveals
to windows and shutters; most have dogleg staircase with
wreathed handrail and stick balusters; otherwise not
inspected.
SUBSIDIARY FEATURES: first-floor window guards to No.1 have
anthemion motif, a designed derived from Henry Shaw (see also
Nos 1-11 Pittville Lawn (qv)); otherwise verandahs have
double-heart-and-anthemion motif to balustrades supplied by
Carron Company, the latest examples in Cheltenham, with
embellished lozenge to uprights and openwork frieze. Area
railings: mainly Carron Company heart-and-anthemion, except
those to left have flattened spearheads.
HISTORICAL NOTE: Sir Arthur T Harris, Marshall of the RAF,
Chief Bomber Command during the Second World War was born at
No.3 in 1892.
The end 2 houses of the terrace (No.10, not included) were
built as flats c1980s to form a symmetrical design.
Radford notes, 'Set up on rising ground at the top of Bayshill
Road (the terrace) has a dominant position with a fine view.
.. It is close to the .. Montpellier Spa, .. the hub of social
life in the 1840s'.
(Chatwin A: Cheltenham's Ornamental Ironwork: Cheltenham:
1975-1984: 38,41; Sampson A and Blake S: A Cheltenham