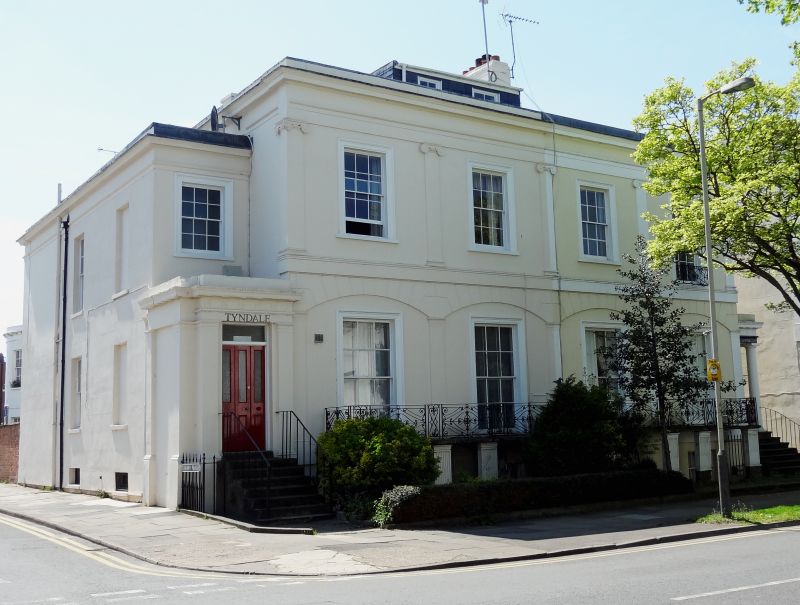 Pair of semi-detached villas and attached railings. 1834,
probably by Robert Stokes, architect. Stucco over brick with
concealed roof, brick and stucco central stacks and iron
railings and balconies.
EXTERIOR: 2 storeys, with attic to Tyndale, and basements, 6
first-floor window range (3 per house), the outer 1-window
ranges have porches to ground floor and are recessed to first
floor; each with range to rear. Stucco detailing includes
pilaster strips to ground-floor, central 4-window range,
surmounted by rusticated segmental arches (forming wide,
shallow window recesses); first-floor band surmounted by Ionic
columns to ends and between windows of central range;
architrave, frieze and cornice with blocking course. 6/6
sashes throughout in tooled architraves; except basements have
8/8 sashes. End entrances: flights of roll-edged steps to
part-glazed doors, with overlight to Tyndale and in surround
with Doric pilasters; and to Clarence Lodge a fanlight, in
shallow distyle Doric porch; both have frieze with triglyphs
and metopes, cornice and blocking course. Attic dormers to
rear.
INTERIOR: not inspected.
SUBSIDIARY FEATURES: stick balusters to sides of steps,
wreathed handrail to Clarence Lodge. Lancet railings to left
of Tyndale. Ground-floor balconies on fluted stucco pillars
have scrolled lozenge pattern balconies derived from LN
Cottingham (plate 16). (Similar balconies elsewhere in
Clarence Square (qqv)).
HISTORICAL NOTE: part of the Pittville Estate, built as part
of the development of this area undertaken for Joseph Pitt in
1825-42, the general layout being designed by the architect
John Forbes. Tyndale and Clarence Lodge were originally known
as 1 and 2 Pittville Terrace North, Clarence Road was renamed
after the Duke of Clarence, who became William IV in 1830.
Tyndale sold to James de Vitre, esq for »1600, 2 Dec 1834;
Clarence Lodge sold to Mary Carden, widow for »1410, 12 Oct