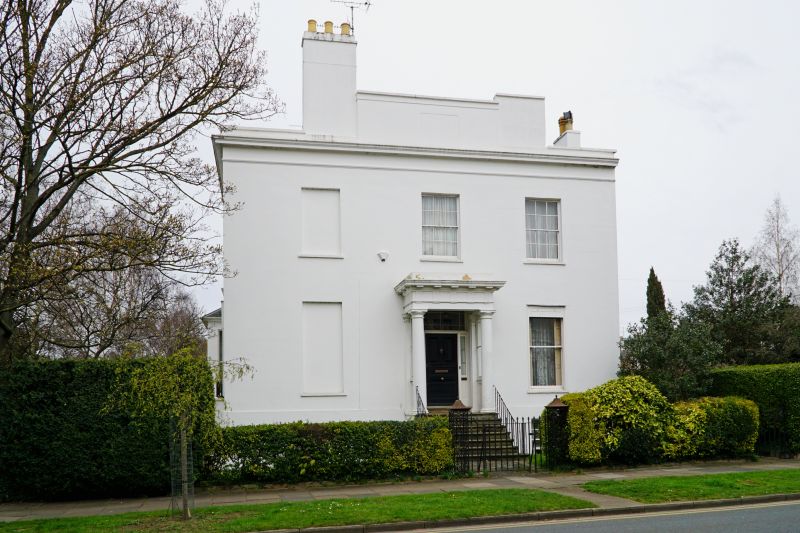 Villa. 1834-5. Stucco over brick with flat-topped hipped slate
roof and end stucco stacks.
EXTERIOR: 2 storeys on basement, 3 first-floor windows and
with service range set back to right. First floor has 6/6
sashes. Ground floor has 1/1 sashes, the two to right have
blind boxes; all windows in plain reveals and with sills.
Central entrance in distyle mutular Doric porch with triglyphs
and metopes. Frieze, cornice, blocking course; stacks
incorporated in raised parapet. Garden facade (west, to
Clarence Square): 3-window range. first floor has 6/6 sashes
in tooled architraves, otherwise 1/1 sashes and Victorian bay
with tripartite 1/1 sashes. Attic to north.
INTERIOR: noted as retaining original joinery, including
shutters.
SUBSIDIARY FEATURES: window guards to ground floor, west
facade. Blind boxes to ground floor, right of main facade.
HISTORICAL NOTE: built as part of the development of this area
undertaken for Joseph Pitt in 1825-42, the general layout
being designed by the architect John Forbes. Clarence Square
was laid out in the late 1820s, building began in 1832. This
was the vicarage for Church of the Holy Trinity, Portland
Street (qv). The Square was named after the Duke of Clarence,
who became William IV in 1830.
Occupies a corner site at the junction of Clarence Square and
Clarence Road.
(Blake S: Pittville: 1824-1860: Cheltenham: 1988-: 37,58).