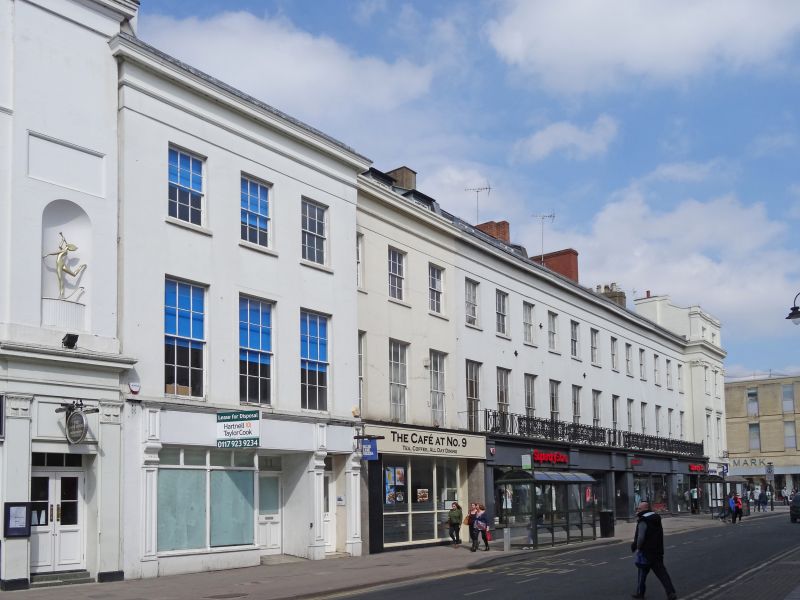 Terrace of 6 houses, now shops with flats over. c1827-8, with
later alterations including c1980s shop fronts. Builder, Mr
Marshall (probably of RE and C Marshall and Inding, iron
working firm). Stucco over brick with concealed roof, slate to
No.9, and tall brick party-wall stacks; cast- and wrought-iron
balconies probably cast by Marshalls.
EXTERIOR: 3 storeys, attic to No.7; 15 first-floor windows;
No.11 breaks forward, First and second floors have 6/6 sashes,
first-floor sashes are taller and to No.1 have tooled
architraves, frieze and cornice; all in plain reveals, sills
to second floor. Attic dormers to No.7 have casement windows.
INTERIOR: not inspected.
SUBSIDIARY FEATURES: first-floor continuous balconies to Nos
1-7 have scroll and cross motifs derived from LN Cottingham.
HISTORICAL NOTE: Clarence Street was so named in 1827 when
Adelaide, Duchess of Clarence (later Queen Adelaide, wife of
William IV), was driven in her carriage along the
newly-created Street.
Forms a group with No.200, High Street (qv), which forms a
stop to the design.
(Sampson A and Blake S: A Cheltenham Companion: Cheltenham:
1993-: 31; Chatwin A: Cheltenham's Ornamental Ironwork:
Cheltenham: 1975-1984: 40,72; Rowe G: Illustrated Cheltenham
Guide 1850: Cheltenham: 1845-1969: 47).