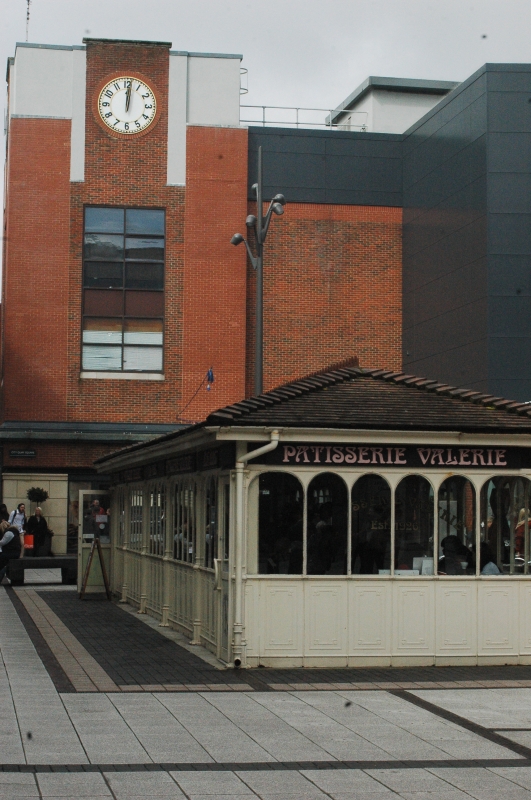 II
Early C20 former tram shelter, formerly in Portsmouth Road, now at Gunwharf Quays, and used as a cafe. The shelter was built in the 1920's by David Rowell & Co. of Westminster, London, for Portsmouth Corporation. It is panelled iron and glass with cast-iron column supports.

EXTERIOR: The shelter is aligned north west-south east and of 5 bays wide. The north and south ends are of 6 1/2 panels wide, the upper half of each panel is a glazed window with rounded head, while the lower part is cast-iron with a raised ribbon band. The windows at either end are wider than the four in the middle. The long west side is five bays wide, each bay divided by an iron column with a stylised composite capital. Each bay has six panels with a corresponding round headed window above, apart from the bay at either end which have four and a door. On the east side are five bays, each with six round headed windows and panels, except for the central bay which has one to either side of a central double doorway. Each column has a moulded base inscribed 'D. Rowell. London'. The tiled hipped roof has projecting timber eaves with exposed rafters and timber fascia board. This has modern signage of painted wood on each face.

INTERIOR: The interior is subdivided to provide a separate kitchen area. The roof has iron roof trusses with tie rods over each pair of columns and a timber boarded ceiling.

The Portsmouth Corporation Tramways Act of 1898 empowered the Corporation to purchase the lines of the Portsmouth Street Tramways Company which lay within the borough, and it exercised this option on 1 January 1901. The Portsmouth Street Tramways Company then extended its lines from the boundary of the borough, and it was not until 1924 that they ran trams into Portsmouth again. Subsequently financial losses in the corporation transport department were attributed to the tramway system, and, in 1934, the trams began to be replaced by trolleybuses. On 10 November 1936 the last tram ran, bringing the tramway era in Portsmouth to an end.

In 1948 the tram shelter was in Guildhall Square. It was dismantled, and two thirds of it was used in the construction of the shelter in Cosham Compound, near Cosham Railway Station. In July 2003 it was dismantled again, due to vandalism, and erected in Gunwharf Quays. The shelter is now Madisons Café, and is located at Market Square, Gunwharf Quays. This shelter and the one at Clarence Esplanade are the only remaining tram shelters in Portsmouth.

SUMMARY OF IMPORTANCE: This early-C20 tram shelter is of special interest for the architectural and technological interest inherent in its decorative cast-iron work, its historic interest as one of the few remaining vestiges of the tram era of public transport in Portsmouth, and its rarity as a building type in a national context. It was moved in 2003 to a new location in Portsmouth, where it has group value with HMS Vernon, Ordnance Board Office Building No.58 (UID 474719), which is a late C18 building c.85m to the south west, and the perimeter walls of the former ordnance works c.1870, (UID 474720)c.150m to the north east.