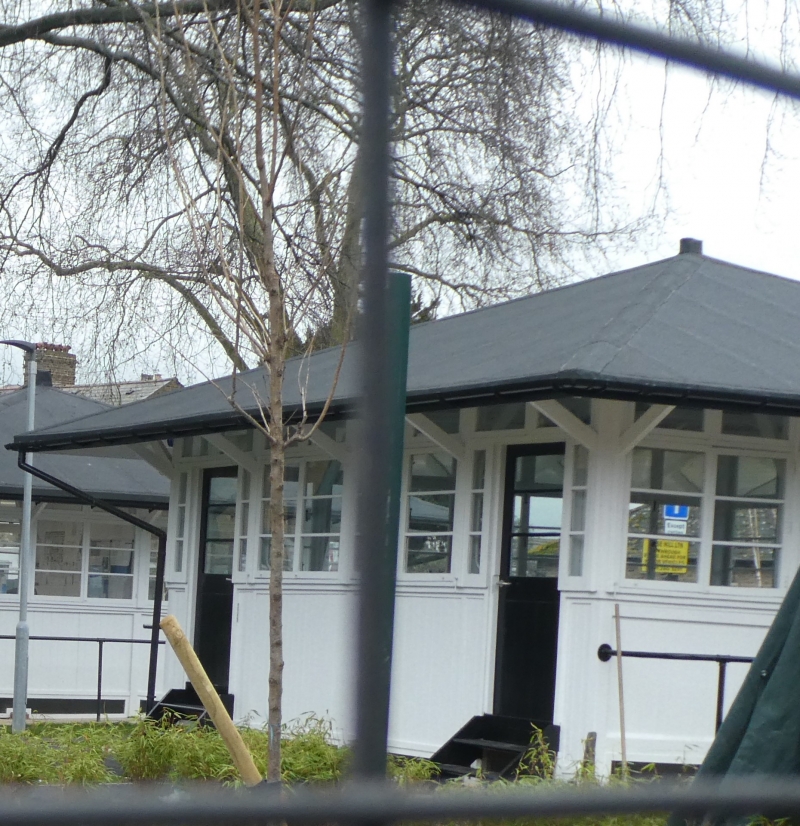 Classroom. 1925 by the LCC Architect's Department. Timber throughout, hipped timber roof clad in felt and with deep overhanging eaves. Square plan, raised off ground on timber posts, which support joists carrying floor boards. The classroom was fully open to the elements above timber half walls when first built, but windows were inserted sometime after 1929, almost certainly in the 1950s. Continuous windows above dado; on three sides these consist of paired side hung casements with catches to hold them when fully open; those on entrance side are three-part folding windows again with catches; all sides with opening top lights. Two doors reached up short flight of steps that to right a later insertion contemporary with the windows but identical in style to the other, with three glazed panels to upper half. Interiors with exposed roofs.
The site of the former Aspen House, including its surviving stable range. was purchased by the LCC in 1920 and plans for the new open-air school approved in 1924. The LCC had pioneered open-air teaching in short-term accommodation as early as 1907 at Bostall Wood and from 1908 at three sites in London. This was the fifth of its LCC's open-air schools, but the first built to an 'improved design' which subsequently became standard for such schools and for similar schools provided for children suffering from tuberculosis. Aspen House School provided classes for anaemic, asthmatic and under-nourished children, with a creative educational policy based on Pestalozzi principles. including many lessons devoted to 'nature study', physical exercises, gardening and creative play. The children were given three meals a day in the school and were required to rest for an hour in the afternoon (longer in summer) on beds in the open air. Children whose poor health disadvantaged their education in normal schools would spend an average of eighteen months here, in classes of no more than 32 to a teacher (generous at the time) with a nurse permanently attached to the school. The stimulative form of teaching -with its accent on self-awareness and discovery -was advanced for its time and part of a wider movement for more fresh air and more informal teaching methods which were widely manifested only after 1945.
Sources
LCC (E de la Mare Norris), London's Open-Air Schools. LCC publication no.2684, 1929, held in London Metropolitan Archives, LCC Official Publications, vol.278. LCC Minutes 1920-25.