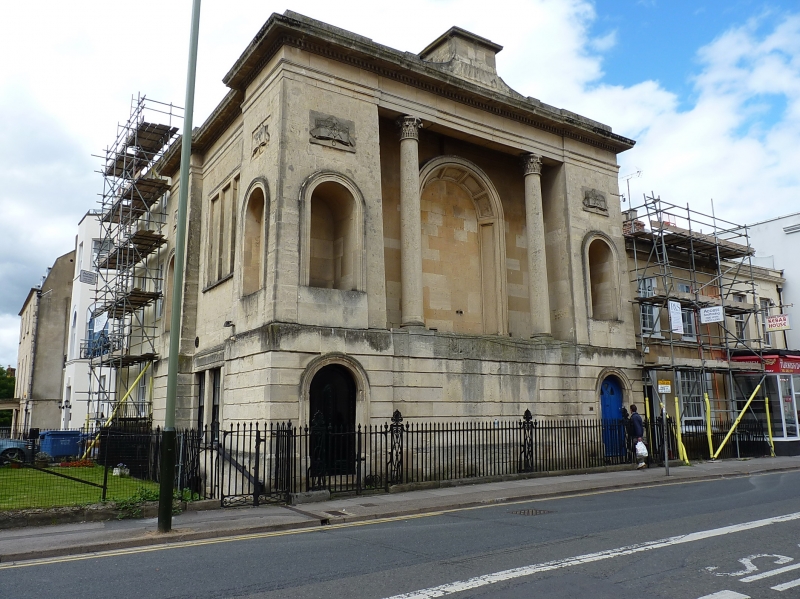 Masonic Hall and attached railings. 1818-23, at a cost of
»4,000 raised by subscription. Architect: GA Underwood for
Foundation Lodge with decorations to dining room (or Banquet
Hall) added c1833 for the Masonic Knights Templar. Ashlar over
brick with concealed roof.
EXTERIOR: 2 storeys on basement, 3 bays: ground floor with
tall piano nobile, and wider bay to centre. The heavy
super-structure is battered. Horizontal rustication to ground
floor, with outer round-arched openings with recessed
round-arched 2-panelled doors (that to right part-glazed). To
upper stage are outer deeply recessed round-arched niches in
tooled architraves and with panels above carrying masonic
imagery; the centre is deeply recessed and has 2 modified
Corinthian/Egyptian columns 'in antis' (the capitals are
carved with lilies and pomegranates) and central further
recessed round-arched niche with splayed and panelled reveals
and tooled architrave. Continuous crowning dentil entablature,
blocking course raised to centre as crowning plinth. Basement
has 4/8 basement sash, otherwise concealed. Left 2-bay return
to Albion Street has recessed centre bay; horizontal
rustication to ground floor. 3-light ground-floor window with
6/6 sashes. Upper stage has similar niches to outer bays and
blind 3-light mullion window in tooled architrave.
INTERIOR: retains a wealth of original features. Hallway to
right has narrow-open-well staircase with wrought-iron
latticework balusters with lead enrichments, oval skylight to
hall has cornice and peaked glazing. Original joinery includes
inner 6-panel door with overlight with Gothic glazing bars;
10-panel doors, some with tooled surrounds. Plasterwork
includes Greek key motif to hall cornice, first floor has
egg-and-dart cornices and ceiling friezes with fleurons.
Dining room (or Banquet Hall) to ground floor at left has
painted decoration of Regency Gothic arcade ('the canopied
stalls of the Knights Templar') with 2 painted recumbent
effigies of knights in niches to either side of window; over
doors the Paschal Lamb and Bible on cushion, also motto "Quis
Domine Habitabat"; carved mantelpiece has emblems of degrees
of Malta and the Rose Croix. Temple to first floor has 2
fluted Ionic columns surmounted by celestial and terrestrial

globes and then wrought-iron balustrade with enriched stick
balusters with anthemions and panels of lyre motif and central
panel with scrolled heart and anthemion motif; steps up to
organ loft have stick balusters and carved tread ends; deep
cornice with dentils; ceiling has central sunbursts; fireplace
with masonic symbols. First floor has marble Regency-style
fireplace. Service staircase to attic has rod and central
bobbin balusters. Attic has slate fireplace. Organ by William
Ayton of 1832.
HISTORICAL NOTE: one of the earliest, and certainly the finest
of the early, purpose built Masonic Halls to survive in
England. Weymouth pre-dates it, built in 1816, though
refronted in 1834, with Southampton built in 1823 and
Sunderland built in 1832 (possibly with earlier origins). The
Hall was designed to be free-standing but now has buildings to
2 sides. A splendid example of a decorative interior, both in
terms of its masonic features and as a well-preserved example
of Regency style in Cheltenham; the dining room ceiling was
originally painted to resemble a tented canopy. The interior
ironwork is probably by Wheeler. Rowe noted in 1845 that 'the
interior consists .. of 2 rooms for transacting the business
of the order; the upper one has an organ and is fitted up with
masonic emblems'. The Librarian and Curator to the Grand Lodge
of England, John Hamill, describes this as a 'quite
magnificent building'.
A highly competent and intelligently articulated composition.
Underwood, who spent a period in the office of John Soane
(1807-15), was elected to the Lodge in 1818 and was
concurrently working on the Church of the Holy Trinity,
Portland Street; he was also the architect of Montpellier Spa
(Lloyds Bank), Montpellier Walk (qv) and the demolished
Sherborne Pump Room, Promenade (1818).
Little described this as 'a brilliant, unconventional essay in
Romano-Egyptian with Greek detail here and there, supposedly
modelled on a Roman mausoleum'.
Forms a group with and abuts railings and gates (qv).
(The Buildings of England: Verey D: Gloucestershire: The Vale
and The Forest of Dean: London: 1970-: 134; Sampson A and
Blake S: A Cheltenham Companion: Cheltenham: 1993-: 76;
Chatwin A: Cheltenham's Ornamental Ironwork: Cheltenham:
1975-1984: 61-62; Little B: Cheltenham: London: 1952-: 56-59;
Colvin H: A Biographical Dictionary of British Architects
1600-1840: London: 1978-: 846; Barnard LW: Cheltenham Masonic
Hall its building and history: 1932-; Dyke PM: The History of
Foundation Lodge 1753-1985: Cheltenham: 1986-: 177-180,
186-205).