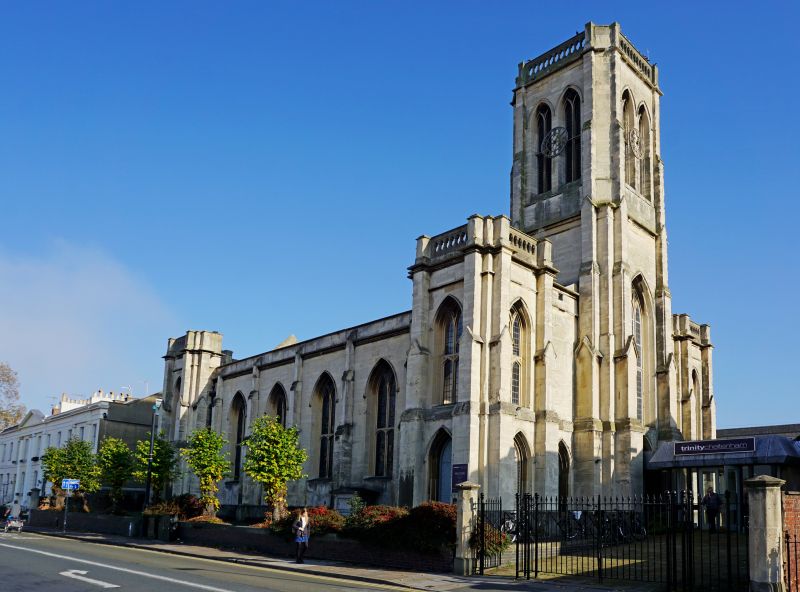 Former chapel of ease, later parish church, now evangelical, charismatic Anglican church, built in 1820-23 to the designs of George Allen Underwood, with alterations and additions of 1877-78 and c 1907, by John Middleton. The interior was reordered in 1996-97.

Former chapel of ease, later parish church, now evangelical, charismatic Anglican church, built in 1820-23 to the designs of George Allen Underwood, with alterations and additions of 1877-78 and c 1907, by John Middleton. The interior was reordered in 1996-97.

MATERIALS: of limestone ashlar on a sandstone plinth with a shallow-pitched roof of Welsh slate.

PLAN: although the church is orientated north-east to south west, liturgical compass points are used throughout this description. The building is rectilinear on plan with a three-stage west tower, two-stage corner towers, a large nave with north and south aisles and a shallow sanctuary. To the south side there is a vestry of c 1907 and to the west door there is a porch of 1984-85. A crypt lies beneath the church. The church stands in a small churchyard which is covered with large ledger stones.

EXTERIOR: the church is of the Commissioners Gothic style. It has a deep, chamfered plinth with a chamfered first stage band to the west and corner towers. The north and south aisles are divided by lateral buttresses with offsets whilst the west tower and corner towers have set-back buttresses with offsets. All the doorways contain double studded doors and all the windows, unless otherwise stated, are of two-lights with a transom and Y-tracery, all with pointed surrounds with label-stopped hoodmoulds. The aisles have stone-coped parapets whilst the west tower and corner towers have pierced quatrefoil parapets, all over moulded cornices.

At the liturgical west end there is a central, three-stage tower with a late-C20 glazed porch to the west door. Its chamfered first stage band is interrupted by a tall, pointed three-light widow with a transom, Y-tracery and label-stopped hoodmould. To the third stage there are paired belfry openings with louvers in all faces. Flanking the tower are two bay ranges with projecting corner towers to the end bays. The bays immediately flanking the principal tower contain doorways whilst the corner towers have blind window openings to the ground floor and tall windows with ogee-headed sub arches below the transom to the first floor. The blind opening to the left-hand bay contains a First World War memorial in the form of a pointed, stone tablet. It has a decorative foliage border with a laurel wreath with a sword in the centre and is inscribed: ‘1914 1919 / PRAISE GOD & REMEMBER/ (NAMES) / THESE DIED IN WAR THAT WE AT PEACE MIGHT LIVE. / THEIR NAMES LIVETH FOR EVERMORE.’

The east end has a gabled central section which projects with angle buttresses with offsets. It contains a large, five-light window with a four-centered arch and rectilinear tracery, inserted in 1877-78; the infilled outline of the arch to the pointed window which it replaced is still visible. The flanking corner towers have two-light windows with ogee arches and flat heads to the ground floor and tall, two-light windows with ogee sub arches below the transom to the first floor. Below the east window there is a flight of stone steps with railings which descend to crypt entrance which has a double boarded door.

The south face is essentially the same as the north face, save for the presence of a small, brick and stone vestry of c 1907.

PRINCIPAL FIXTURES: a distinctive feature of the church is the presence of around 172 wall monuments in the nave, largely by Lewis of Clarence Street, Cheltenham, and mainly dedicated to vacationing gentry and retired Indian officers and civil servants; the most ambitious being to Colonel Augustus Warburton (1783-1836) of the King's Light Infantry and erected by his fellow officers. At the east end there is a stone reredos wall panel comprised of five recessed panels inscribed with the Apostles' Creed and the Ten Commandments. The font of 1879 was presented to the church by Revd JH Shaw. It retain a complete set of floral stained glass, added by Middleton in 1877-78.

CRYPT: beneath the church is a barrel vaulted crypt of brick construction. It contains 400 burials in multi-layer stone coffins, arranged in four rows.

SUBSIDIARY FEATURES: the burial yard within which the church stands is enclosed by brick walls. The walls to the liturgical east, south and west sides are of C19 date, with some C20 stone coping, whilst the wall to the north side, fronting Portland Street, dates from the late C20 with C19 stone coping. The Portland Street entrance is flanked by C19 gate piers of limestone with sandstone bases; the left-hand pier being restored in the late C20.

The Church of the Holy Trinity was designed in 1817 by George Allen Underwood, a former pupil of Sir John Soane, and built in 1820-23 as a chapel of ease to the parish church of St Mary. It was, after St Mary's, only the second Anglican church to be built in Cheltenham and was therefore known as the 'New Church'. The church was partly erected at the expense of subscribers, but principally at the expense of Lord Sherborne, the then Lord of the Manor. Consecrated on 11 April 1822 by the Revd Dr Ryder, Bishop of Gloucester, it was initially licensed only for burials.

Holy Trinity's first incumbent was the Revd Francis Close (1797-1882), Rector of Cheltenham and later Dean of Carlisle. As Cheltenham increased in population in the mid-C19, Close developed the town into a leading evangelical centre. He erected four district churches, each with an infant and national school, established training colleges for teachers and was one of the co-founders of the Church of England Education Society. However, his appointment of evangelicals as curates, as incumbents to the district churches, and as members of staff in educational establishments, brought a critical response, particularly from Lord Alfred Tennyson, who called Close a parish pope.

Alterations to Holy Trinity's interior were made in 1877-78 by John Middleton, including a larger sanctuary, a less intrusive pulpit and a free standing reading desk for the priest. Middleton also renewed the balustrades to the gallery, replaced the east window and inserted new pews and floral stained glass.

In 1898, Holy Trinity was assigned an ecclesiastical district and became a parish church in its own right. A short time afterwards, in around 1907, Middleton undertook further alterations, including the addition on a vestry on the south side.

In 1996-97, the interior was reordered with the majority of the fittings inserted by Middleton, including the pews in the nave and the gallery balustrades, being removed. It is now an evangelical, charismatic, Anglican Church and has been renamed Trinity Cheltenham.

Trinity Cheltenham, formerly the Church of the Holy Trinity, built 1820-23 by G A Underwood, with later alterations and additions, it listed at Grade II* for the following principal reasons:
* Architectural interest: designed by GA Underwood, who spent a period in the office of John Soane, the church displays some Soanian influence, distinguishing it from the more utilitarian church designs of the period;
* Fixtures and fittings: it retains a complete set of good quality, late-C19 stained glass by John Middleton, one of the most talented local church architects of the era;
* War memorial: the First World War memorial at the west end is a poignant reminder of the impact of tragic world events upon an individual community;
* Historical association: the church’s first incumbent was Revd Francis Close who developed Cheltenham into a leading evangelical centre in the mid-C19, erecting four district churches, each with its own infant and national school;
* Historical interest: as the first church to be built in Cheltenham after the medieval parish church of St Mary (now Cheltenham Minster).