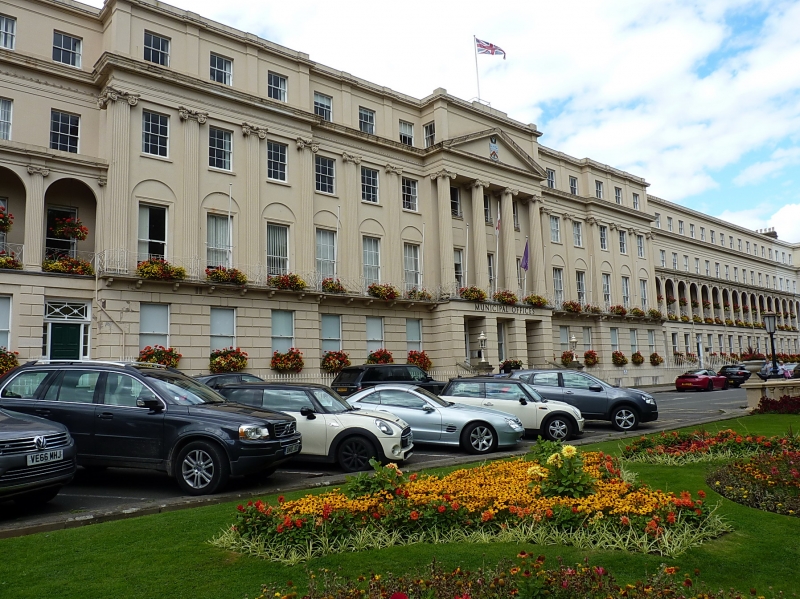 Entry Name: Numbers 47 to 83 and Attached Railings with Low Walls and End Piers to Numbers 71 and 73

Tagged with: Seat of local government

Terrace of 19 houses, now Municipal Buildings, with attached
railings, piers and low walls. Begun 1823, building continued
to c1840, the central portion shown as incomplete on Merrett's
map of 1834, and with later additions and alterations
including some C19 and C20 ranges to rear. Possibly by George
Underwood for the Imperial Estate; built by the Harward
Brothers. Ironwork by RE Marshall. Stucco over brick with
slate roof where original, and wrought- and iron railings and
balconies.
EXTERIOR: 4 storeys with basements, 3 first-floor windows
each. Stucco detailing includes rustication to ground floor
surmounted by first-floor band. Ionic columns to first-floor
arcade at recessed ranges and second-floor sill band above.
Continuous architraves over second and third floors.
Breakforwards to end 6-window ranges and central 15-window
range. Central breakforward has further 3-window central and
end breakforwards, that to centre has pediment over second
floor on 4 fluted Ionic columns with 6 similar pilasters each
side. End breakforwards have Doric pilasters to end windows
through first and second floors and Band of Greek key fretwork
between first and second floors. 6/6 sashes where original,
with 3/3 sashes to third floor, all in plain reveals and with
sills. Entrances: steps to 6-panel doors where original (upper
panels raised and fielded, lower panels with fluted
surrounds).
Many 6/6 sashes remain to rear and several round-arched
staircase windows with 8/8 and 6/6 sashes with radial glazing
to heads; also 4/4 sash with radial glazing bars to head and
margin-lights.
INTERIOR: some original features remain including plasterwork
to No.77; narrow-open-well staircases have stick balusters and
wreathed handrails, where original.
SUBSIDIARY FEATURES: entrances to centre bordered by low walls
and end panelled piers with cornices, surmounted by lamps.
Railings and probably balconies by RE and C Marshall; urn
finials stamped 'Marshall'; balconies have central floral
motif within a circle.
HISTORICAL NOTE: originally the Imperial Estate and Harwards's

Buildings. The central 7 houses were converted into Municipal
Offices in 1916. The Promenade was laid out in 1818 as a
tree-lined drive to the Sherborne Spa (on the site of the
Queen's Hotel (qv)) from the Colonnade in the High Street, by
1826 it was a carriage drive with spacious gravelled walk on
each side and originally known as Sherbourne Drive. Buildings
on the NW were the first to be developed. Although originally
on either side were 'rows of elegant houses, by 1845 when Rowe
wrote his Cheltenham Guide (though published in 1850) he noted
that 'nearly the whole of the left-hand (SE) side .. is
devoted to professional or business establishments'.
Verey describes this as 'equal to any terrace in Europe'. An
excellent overall design which, outwardly, is the most
impressive manifestation in Cheltenham of the style adopted in
Nash's grand Regent's Park terraces. Compares well with other
examples nationally.
(Chatwin A: Cheltenham's Ornamental Ironwork: Cheltenham:
1975-1984: 29,54; The Buildings of England: Verey D:
Gloucestershire: The Vale and The Forest of Dean: London:
1970-: 132-3,146; Sampson A and Blake S: A Cheltenham
Companion: Cheltenham: 1993-: 6,75,84; Williams GA: Guide Book
to Cheltenham: 1824-: 29; Rowe G: Illustrated Cheltenham
Guide: Cheltenham: 1850-1969: 12; Radford S: The Terraced
Houses of Cheltenham 1800-1850: 1992-: 64-73).