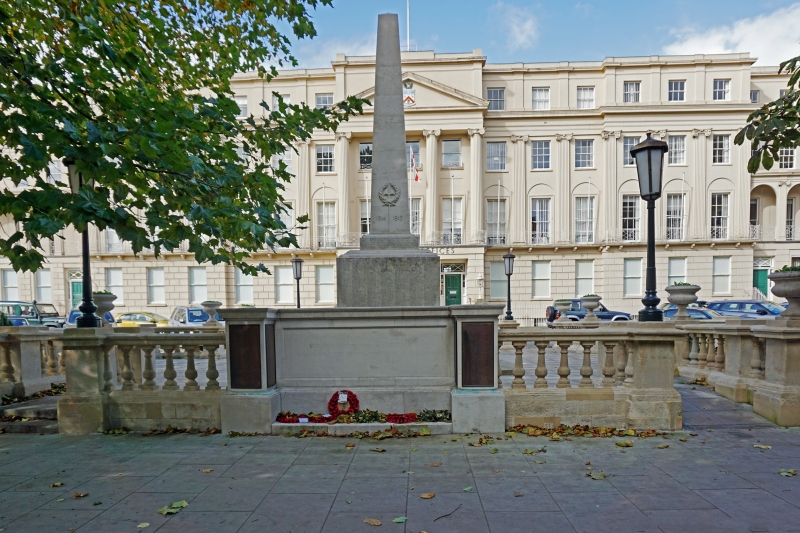 DESCRIPTION: Cheltenham war memorial is located on Promenade outside the Municipal offices within the Long Garden. It consists of a Portland stone obelisk, square on plan, rising from a large square plinth set on a three stepped base.

The plinth has a raised carving of the Borough coat of arms on its west face and bears the incised inscriptions of the names of the fallen from the First World War on the other three sides. On the east face of the obelisk is a wreath encircling the hilt of a reversed sword, carved in relief, with the dates 1914 1919 either side of the blade. Immediately below this is the incised dedication which reads REMEMBER THE MEN OF CHELTENHAM/ WHO GAVE THEIR LIVES FOR YOU IN THE GREAT WAR./ IF THEY WERE STRANGERS TO ONE ANOTHER HERE IN THEIR COMMON HOME, THEY/ SERVED AND WROUGHT AND DIED IN MANY LANDS NEAR AND FAR AS A BAND OF/ BROTHERS. LEARN FROM THEM SO AS TO LIVE AND DIE THAT, WHEN YOU HAVE FOLLOWED/ THEM AND ARE NO MORE SEEN, YOU MAY, LIKE THEM, BE REMEMBERED AND REGRETTED.

SUBSIDIARY FEATURES: The memorial stands within a paved area (laid out as a square at the centre of the Promenade gardens with apsidal walls to north and south by 1903), enclosed by stone balustrades with lamps and urns. To the east of the memorial a later stone wall with end piers, inserted to the balustrading, carries metal plaques bearing the names of the fallen from subsequent conflicts.

This List entry has been amended to add the source for War Memorials Online. This source was not used in the compilation of this List entry but is added here as a guide for further reading, 10 January 2017.

Following the First World War a committee was set up to decide on an appropriate war memorial for Cheltenham. Following a design competition, the committee resolved to invite R L Boulton and Sons, a local firm, to build its design. The memorial, costing £1,800, was paid for by public subscription but due to the poor response to the appeal the memorial design had to be revised. This lead to some delay, the monument being unveiled on 1 October 1921 by General Sir Robert Fanshawe.

The memorial commemorates nearly 1,300 local servicemen who died during the First World War. There have been numerous additions of the names of those who fell in subsequent conflicts, including 360 Second World War military and 33 civilian casualties, seven casualties of the Korean War, 2 of the Dhofar Rebellion and one soldier who died during the Falklands Conflict.

R L Boulton and Sons, architectural sculptors and founders based in Cheltenham from 1870 and active until the 1970s, was responsible for work in many churches and municipal buildings. Its numerous war memorials include the LNER and LMS Railway memorial in Euston Square, London, and the Royal Gloucestershire Hussars Yeomanry memorial, Gloucester (both Grade II*-listed). The company modelled the statue on the Grade II-listed Boer War memorial adjacent to Cheltenham’s First World War memorial.

Cheltenham War Memorial, which stands on Promenade, is listed at Grade II for the following principal reasons:
* Historic interest: as an eloquent witness to the tragic impact of world events on this local community, and the sacrifice it has made in the conflicts of the C20;
* Architectural interest: a dignified obelisk in the Classical style;
* Group value: with the Boer War Memorial, Statue of Edward Wilson (both Grade II), Numbers 47 to 83 and attached railings with low walls and end piers to numbers 71 and 73 (Grade II*), and numerous other listed buildings on Promenade.